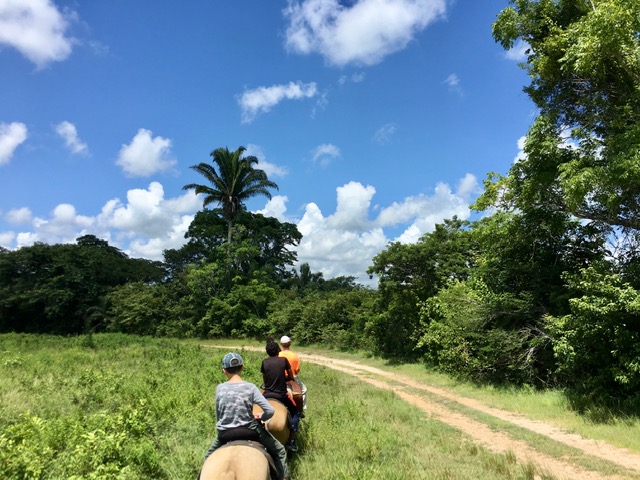 We had the good fortune of discovering a profoundly uncommon, singularly special, peculiar and prismatic property this week: Banana Bank Lodge and Jungle Horseback adventures.

This place was seriously cool and completely unexpected.  We had to go to Belmopan for some errands like a pediatrician visit and an appointment at the US embassy to renew Mitch’s passport.  Our friend Julia (remember our adventure to Blue Creek Cave here?) mentioned she’d seen an ad on Facebook for discounted rates on horseback riding and lodging near Belmopan and suggested we extend our un-fun errand run to include a fun diversion in the form of horses.

Discounts are a dime-a-dozen at the moment with the tourism sector pushing domestic travel as our borders are still closed to international visitors but this especially was a steal of a deal.  I was nearly of a mindset to decline and just get what needed to be done over with and get home but I’m so pleased we went.  It was a magnificent property and fantastic experience and here’s why:

Imagine an old southern plantation plopped down in the jungle in Central America.  Creeping vines climb a sweeping staircase.  The equatorial sun casting shadows under archways and sparkling off the stained-glass windows.  Some buildings like a covered porch/ observation deck for an aviary filled with bright tropical birds and what appeared to be an old caretaker’s cottage looked to be colonial era clapboard construction.  Our overnight accommodations were typical Belizean style, complete with thatch roofs.  There was another home that I would have loved to see the inside of because the outside was so unique in it’s mixed use of glass and Belizean hardwoods- beautiful.

The scope of the estate.

I think it was originally something like 8000 acres- don’t quote me- but it’s a massive tract of land that saw its first modern inhabitants in the late 1800s in the form of British logging companies and their workforce of slave laborers.  When the wood was all sourced it became a cattle ranch, which naturally led to horses and then horse racing.  Of course, plenty of the namesake- bananas- grow in the fertile soil and we saw acre upon acre of cane sugar growing as well.  I don’t know how many days on horseback you would need to explore every corner of this property but I can tell you I personally didn’t scratch the surface.

The proprietor of the estate, John Carr, is all about the horses.  He was like a proud papa, showing me the papers on his newest stallion- an American Quarter horse with an impressive (at least I got the impression I was supposed to be impressed, I wouldn’t know the first thing about horses or their lineage but John was pretty excited about it) pedigree.  They have over 80 horses and they mostly wander freely through the property, sometimes in little family groups.  There’s an assemblage of other farm animals: cattle, chickens, and friendly dogs.  But, there are also some creatures you wouldn’t necessarily anticipate.  A troop of obnoxiously raucous howler monkeys.  Pretty peacocks, inquisitive green parrots, and a real deal, bona fide, GOTDANG JAGUAR!  The queen of the jungle! Majestic!  She was rescued and now lives the good life at Banana Bank; eating cow heads and contently lazing about.  I think I took about a hundred photos of her.  She looks about as healthy and happy as any pamper house cat but a thousand times more regal.  ::swoon::

The art and artifacts.

When John and Carolyn bought the place in the 70s they started a collection of Maya artifacts unearthed from around the property.  Forty years later, their collection rivals any museum I’ve ever seen.  John said that any time they ploughed an acre they’d turn over a Maya mound and all it would take was one hard rain to bring the relics to the surface of the soil.  Pottery, arrow heads, grinding stones, statues, beads, it’s all here!  Ancient artifacts of the Maya share space next to antiques from the property’s former glory days.  I asked about the purpose of a few huge bear traps on display… as lore has it, the crocodile in the river here grew to mammoth proportions and they would bait these massive traps with live chickens to snare the behemoths.  The meat was consumed and the skin sold abroad to satisfy some design of fashion.

Carolyn is a gifted and skilled artist and a lifetime of her work in on display here.  The wildlife paintings are exquisite but I’m mesmerized by her depictions of the people and places of Belize.  Scenes like Mayan women weaving on looms or washing in the river, Creole mothers making cow foot soup while juggling other domestic duties, or men turning the crank at the historic swing bridge.

John and Carolyn Carr are fascinating people and I would love to listen to them expound on their personal history and experiences in Belize, what was British Honduras when they arrived.  John is nearly eighty years old.  I found this shocking, as he is so energetic and able-bodied.  You would think a former rodeo star’s body would be broken, absolute garbage by fifty let alone eighty but he was running around with the kids and singing us vintage verses from WWII times.

If you are planning a trip to Belize (or if you’re already here and considering an in-country adventure) I very much recommend a few nights at Banana Bank Lodge.  It’s close to the acclaimed ATM cave, the most sacred cave in the world, as well as the popular and impressive archaeological site, Xunantunich temple.  Either or both of these would make memorable excursions from Banana Bank and you’d still be back in time to watch the jaguar receive her evening meal.

Road Trip: Hummingbird Highway, where to stop along the way

Horseback Riding and a Waterfall- Day Trip from Placencia