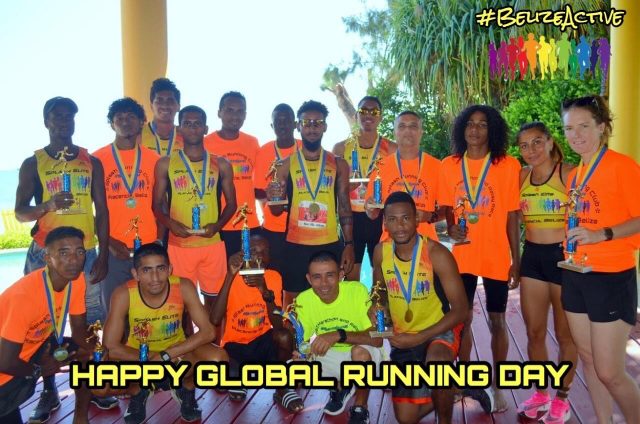 #BelizeActive is the brainchild of Patricia Ramirez, owner and operator of Splash Dive Center in Placencia, Belize.  Originally from Honduras, Patty, as she’s known to friends, has called Belize home for a long time.  She is a community champion, environmental activist, mother, conscientious business owner, meticulous event organizer, and top-notch motivator.  She’s taken the idea of a local running club and united athletes (and wannabe athletes) from across the country and beyond- Mexico, the US, even Holland.

In addition to the local kids running club she’s organized in Placencia and sponsors training and events for; she has also spearheaded an Elite club of choice athletes to train and compete under the umbrella of Splash Dive Running Club.

Due to the State of Emergency and subsequent shut down of the country, races and sporting events have been canceled.  Patty found a way to bring together her runners virtually through an online challenge instead of an in-person race.  We’ve just wrapped up our 100k challenge.  Each participant ran their own races and logged their time and distances for the month of June.  The goal: 100 kilometers.

The virtual race was monitored by Total Time, a highly reputable chip timing company that oversees almost every race in Belize.  More than 70 runners participated here and abroad, representing Splash running clubs.  I typically don’t track my time or distance and had reservations about running with my phone (I sweat profusely and was worried about damaging my device but a ziplock bag did the trick) but I downloaded the app Strava and did it for this month’s challenge.

It’s a scenic little out and back- lagoon views with mountains on clear days, sea and cayes too.

Splash is organizing another collaborative virtual challenge for the month of July AND I’ll be running a half marathon with my friend Wanda from the Siene Bight Kids Running Club.  What’s keeping you motivated?

Apocalypse Prepping in Placencia (for Dummies)