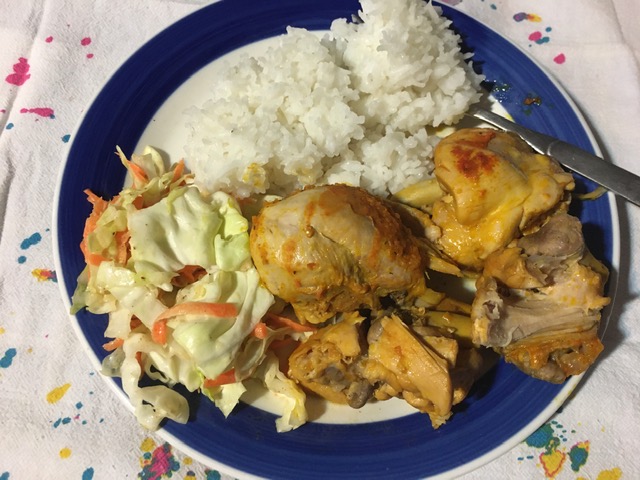 Okay, so it’s been my goal since we moved to Belize to improve my cooking skills in general but to learn to cook like a local specifically.  I want to be proficient at (I don’t expect to master the local culinary skills, I know I’ll never throw a tortilla like a Maya) cooking regional fair because it’s 1) delicious and fresh 2) much more affordable!  Imported ingredients can be pricey!

Our first year here I made a friend at the Crossfit gym in San Pedro- Bella is a chef, mom, cancer survivor, and all around badass.  She so kindly tried to teach me how to make the quintessential Belizean dish- Rice & Beans!

Anyone who calls themselves a Belizean has to know how to make a nice rice and beans.  I fear they’ll make this part of the citizenship requirements and Immigration will deny my application because my dish is terrible.  I tried to recreate what Bella had done but I could never replicate it.  I TOTALLY gave up on black beans- how long you have to cook these suckers? 40 days and 40 nights?! Forget it- ain’t nobody got time for that.  Also, for some reason I battle with rice; it’s either too dry and the bottom burns or I put too much water and it gets gummy.  I don’t know!  But I did (kinda, sorta) figure out how to make a cheat version of the traditional stew chicken… in the crockpot (in typical lazy-American fashion).  Here is my recipe for (easy, imitation) Belizean Stew Chicken:

First start with chicken cuts.  Bella breaks down a whole chicken but I don’t know how to do that so I go with the cuts.  The packages of “chicken cuts” are super cheap too- these 2 hefty packages set me back $11.60 bzd  I pull off the extra skin beforehand but I guess you could cook it.

Then in your crockpot, or instant pot (I’m using my new instant pot my MIL sent me last Christmas) prepare the sauce.  For this you need some white vinegar, a couple of limes, Marie Sharps (of course!), and the Belizean Seasoning Original- make sure it says “Dis da fu we Ting!” on the label.  I think that translates to “this is the shit we use.”  Proceed with caution- the Amarabi sauce is highly concentrated.  A little goes a long way and it is very very salty.

For my 2 big packs of chicken cuts I’m using roughly 1/4 cup of vinegar, 1/4 cup of Belizean Seasoning, juicing 3 limes, and adding a few liberal shakes of Marie Sharps hot sauce to taste (if you like spice- get loose with it). Then add you chicken cuts and stir them around so they’re all coated nicely.  You could also put some sliced onions in the pot, that would be nice but it’s not necessary.

Lastly, set the pot to cook.  That’s right set it and forget it.  Crockpot? Let it go all day, 6-8 hours.  Instant pot? Pressure cook that mess for 40-60 minutes.  The result is perfectly edible, soft and salty chicken pieces.  Is it as good as your Belizean neighbor makes? Hell no!  But your husband will eat it and if he knows what’s good for him he won’t complain because: hey, you tried.

The Top Tour Guide in Placencia