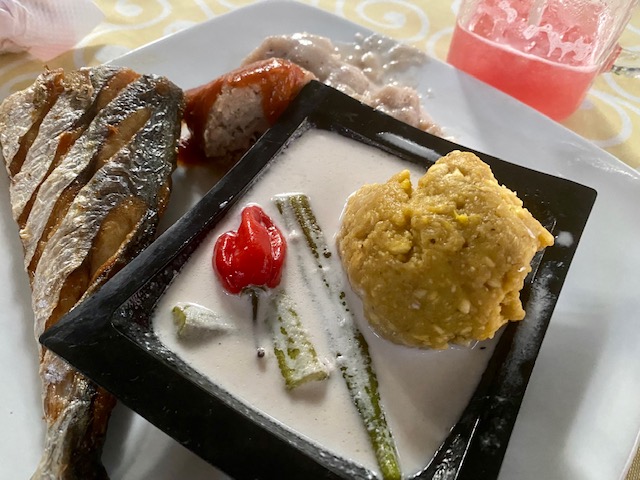 Belize has the best experiences!  Last week I had the pleasure of enjoying another super special, only-in-Belize, incredible excursion.  The Barefoot Services team took me along on this enlightening (heh heh, get it?) bioluminescence and Garifuna culture tour to Hopkins.  This was totally different from the adventures I usually go in for (zip lining or caving or the like) but one that I’ve been hoping to attend for a long time.  Bioluminescence is a naturally occurring phenomenon throughout the marine environs in Belize but Hopkins’ lagoon has a unique concentration of the fluorescent algae, allowing visitors to witness the fantastical sight of this light-up-lagoon.  The movement of surrounding fish can be tracked by their glowing trails as your boat’s wake sparkles behind you; it’s astonishing!

Two Tours in One

First Leg- History, Culture and a bit of Sightseeing

I took this tour from Placencia, with Barefoot Services so we were picked up in their large and comfortable vans to take the one-hour drive to Hopkins Village.  Gaze out the windows at the Cockscomb Mountain range as you travel up the Southern Highway.  Pass through citrus groves, fields of grazing cattle, and the village of Maya Center.  Along the way, Ian, our tour guide, gave us a brief but fascinating history of the area and the Garifuna people.  Your introduction to the Garifuna culture continues at Tugucina Gloria were we stopped for a dinner of traditional dishes.

Hudut is one of the Garifuna People’s most popular dishes.  A hearty ball of mashed plantain in a coconut broth, served with fish.  The dish is more savory than sweet and the dense plantain is a nice contrast to the delicate soup.  Ours had a bit of okra and one scotch bonnet pepper floating inside that I was too chicken to try.  On the side we tried two banana dishes that were new to my palate.  Bundiga, a boiled sort of banana lump with a sauce on it.  The other was Darasa, a tamale type of creation but made from banana instead of ground corn.  Both of these dishes were gelatinous.  Dense and gelatinous and not at all banana-y flavored.  It wasn’t unpleasant but I wouldn’t go so far as to say I like it.  Nobody in our group won the ‘clean plate’ award but everyone was very excited to have had an opportunity to try these specialties.

After dinner you drive out of Hopkins proper on a dirt road until it dead ends at the boat launch.  This area is called Commerce Bight and has a designated center for Garifuna cultural immersion tours- cooking, dancing, drumming… I definitely have to come back and check it out!  By now it should be dark as your captain begins winding the boat through the magnificent maze of mangroves.  I don’t know how he can possibly know one channel from the next but he does.  The infinite blanket of stars overhead and the guide’s flashlight are the only illumination until a few channels in.  Then, the water agitated by the boats track begins to glow a brilliant blue.  Fish streak through the shallow water after prey and cut glowing zig zags around you.  The splash of a fin gets an especially brilliant flash.  What I couldn’t stop doing was dragging my fingers through the water and kicking up a spray of sparkles- it’s an almost unstoppable compulsion!  It’s just too cool!

We hunted down a resident Morlet Crocodile in the wide expanse of the bay and stalked him for a bit trying to get close enough for a good photo but failed.  I wish I had any usable photos from this excursion but it’s truly one of those you-have-to-see-for-yourself things.  Bioluminescence doesn’t show up on film or in the photos from my phone.  I’m so bummed but you’ll just have to take my word for it- this is worth checking out.

When to go and how to book

I learned that bioluminescence isn’t necessarily a seasonal phenomenon as I had initially thought, but can occur year-round.  However the weather greatly impacts the concentration of the biolum algae so there are times and conditions that are better for the lagoon light show.  First of all, you want to go around the new moon.  You want the night sky to be as dark as possible so that you can view the lights below you more easily.  Second, rain fall ruins the water balance (adding too much fresh water to the brackish stuff the algae prefer) so going the day of or after heavy showers isn’t recommended.  Third, the algae blooms in warmer temps so you’ll have the highest concentration in the hotter (and drier) months.  I’d say November and December are probably the worst months for this particular tour and April and May might be the best.

If you’re staying on the Placencia Peninsula, you 100% want to book this tour with Barefoot Services (and maybe inquire about some of their other incredible experiences…? I’m thinking their Dangriga Cultural tour would be fascinating and they offer a two-temple-tour of Southern Belize’s Maya sites that are less frequently visited but just as historically interesting as their flashier siblings in the north).  Contact their office about one tour, custom tours, and multi-day packages.  If you aren’t sure what you want to do, let them guide you in the decision making.  I like Barefoot Services because they’re more than just a tour operator, their services include travel concierge for itinerary planning.  They’ll even help you book accommodations in multiple destinations around the country.  Don’t forget them for ground transfers and vehicle rentals too!  www.barefootservicesbelize.com

Where to stay, what to see in Orange Walk