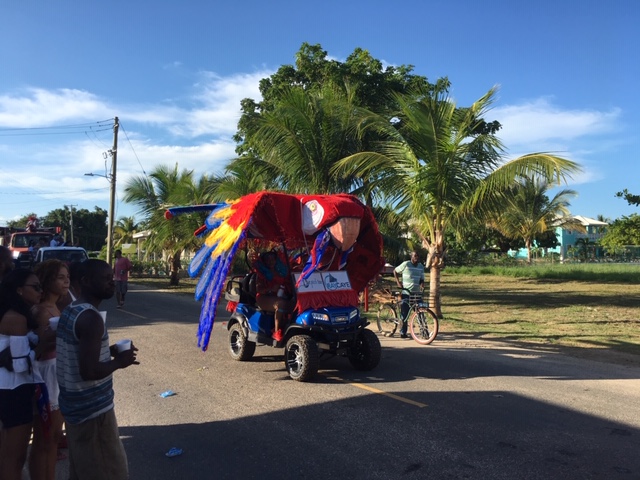 September 21st– Belize’s Independence Day and a huge party in Placencia. I only realized this year that not every town in Belize does it up like we do for our parade and party. Most villages with have a small parade and some snacks on sale but they don’t have a Carnival celebration like we do- not even Belize City! Orange Walk and San Pedro have big celebrations but we are the three locations to visit for fancy costumes, loud music, excessive shaking and merriment.

Our carnival seemed rather subdued this year. Typically, we’re (the collective we- the whole village really) awakened at the crack of dawn by Jouvert. Jouvert is a LOUD, raucous, loosely formed but well lubricated street parade of sorts that awakens the neighbors on Carnival morning. There is usually chocolate syrup being thrown around for some reason and a swim in the sea at the end. But this year it was suspiciously quiet and well after day break I was wondering- what happened to Jouvert? Apparently, the village up the road, Seine Bight, stole the Jouvert this year so I don’t have any pictures.

We were out at the street ready for the parade WELL ahead of time because as you may have heard- things in Belize never start on time. No problem though it gave us a chance to chat with neighbors and have a libation. 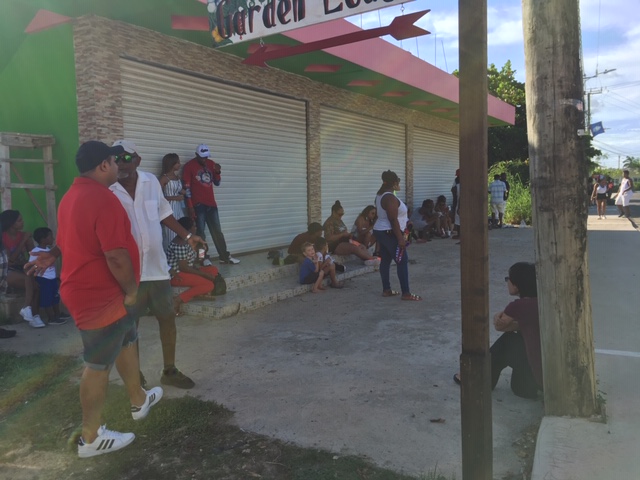 First in the parade line up was Placencia’s very own busted up, broken down firetruck that we’re desperately fundraising for to get replaced. You can’t so much tell in this photo but it’s literally cracking in half, rusted, can barely hold any water… close to being useless and it has to service the entire peninsula. Scary! We’re currently raising funds to get a newer refurbished truck from Canada or the US (or maybe both if we can swing it! It would be ideal to have one truck down here and one further up the peninsula to be serve Maya Beach, Plantation, Riversdale). 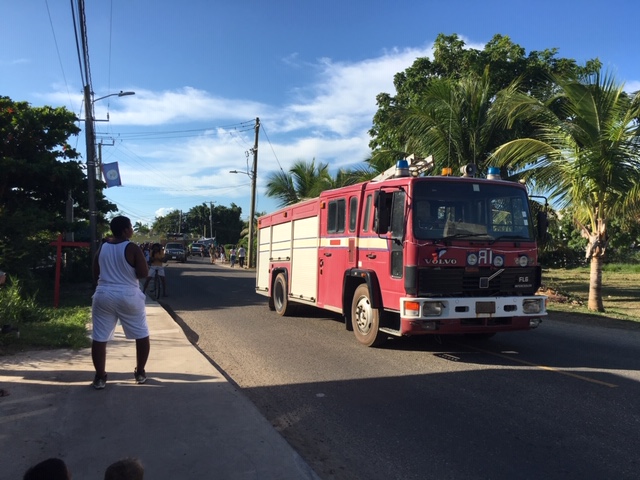 Then we had our first fancy group- Emerald’s Empresses! Super cute costumes for this teen team, kinda bummed we missed the choreographed dance. 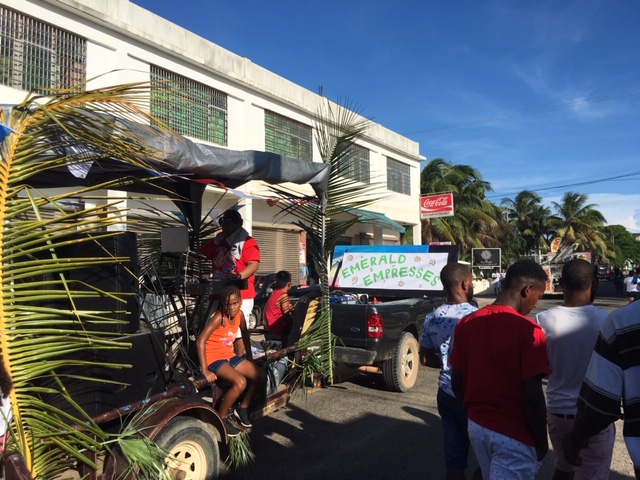 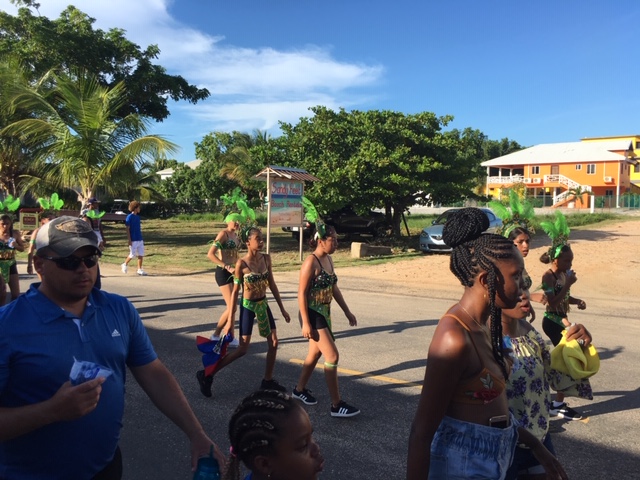 Next Secret Treasure sponsored a group of fun adult partiers. I don’t think they had choreography but they had FUN! 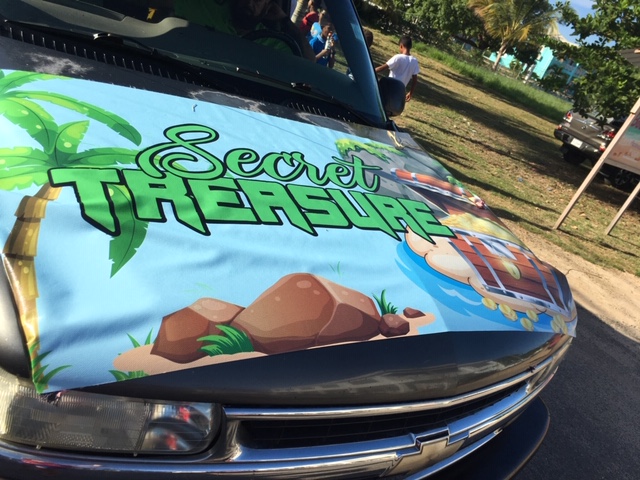 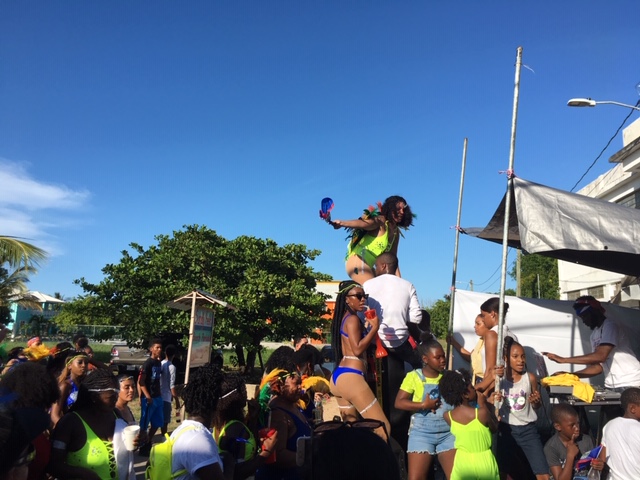 After that The Placencia Hotel and Casino (a Muy Ono resort) had a little float. 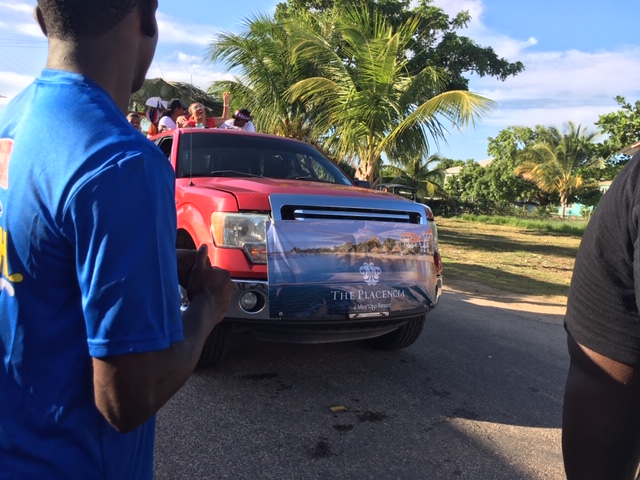 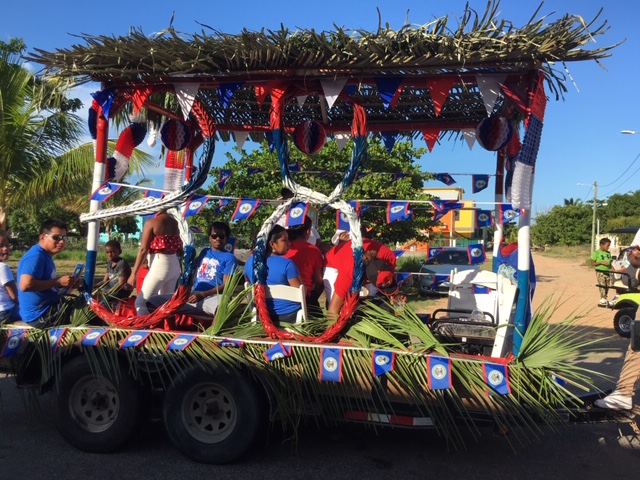 And my friend Julia, Placencia resident via South Africa, was handed a flyer advertising a Foam Pool Party at the property the following day- how fun does that sound?! 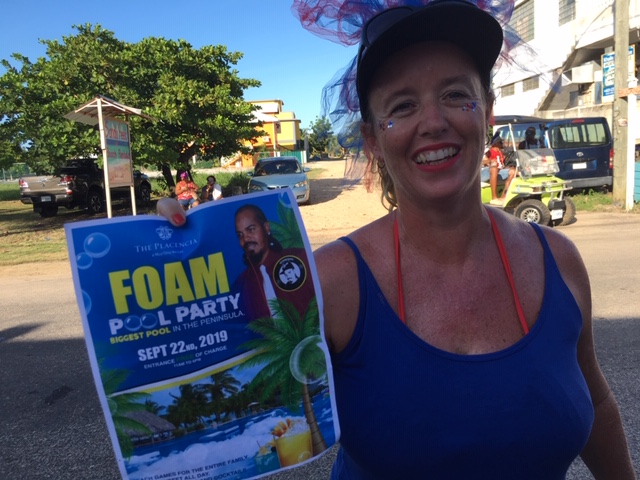 Then there was this fancy group… I don’t know who they were. 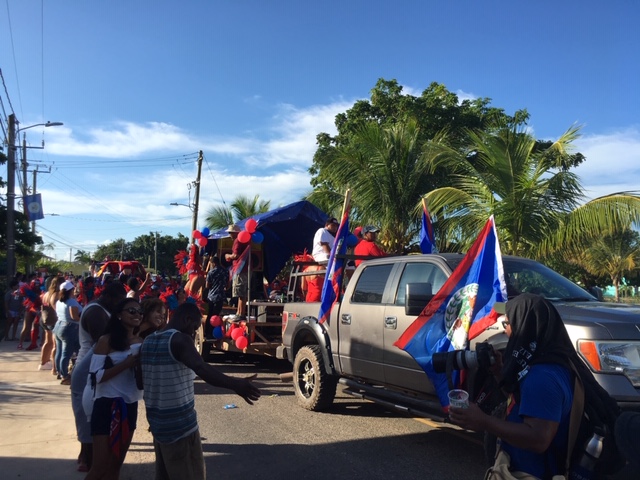 But they were having a good time. Lots of gyrating. 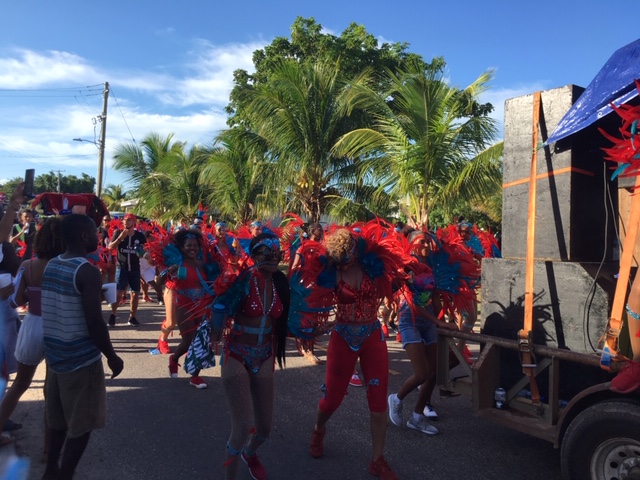 Then my favorite- this amazing macaw golf cart float! How incredible is this? Last year they had a sea themed float with a sea turtle that was also a show stopper. 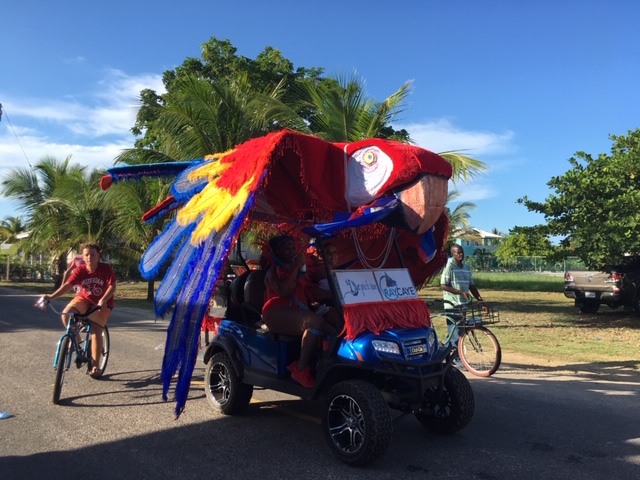 And the Belikin truck handing out samples of the Beer of Belize along with some swag, my friend Julia got a hat. 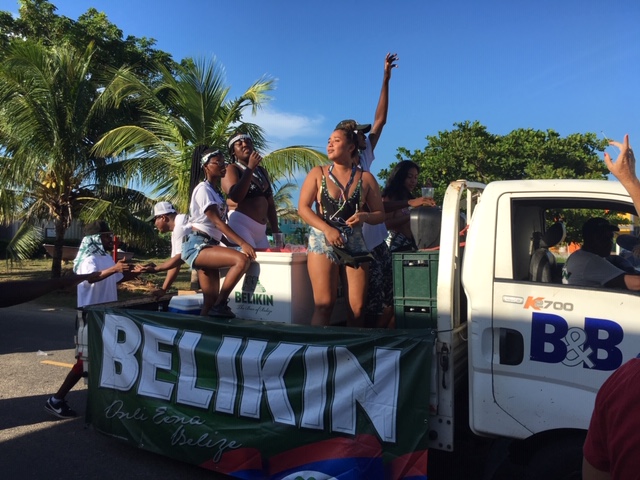 Followed by my other favorite, the garbage truck driven by one of the BEST public works guys in the WORLD. Seriously our sanitation guys on this peninsula are superheroes; Mitch and I idolize them. They work so hard in some extreme conditions and they always have a smile for you and a friendly good morning- even a high five when I pass them on the road on my morning jog. They have arguably the toughest and most important job on the whole peninsula. Today they were enjoying a well deserved break and towing the local semi-professional soccer team, The Assasins. 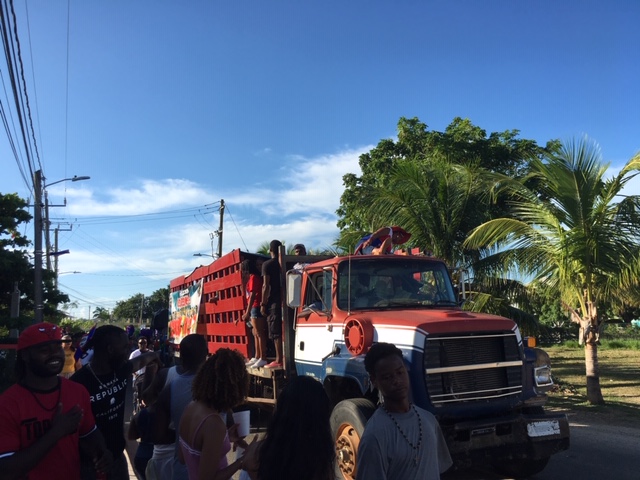 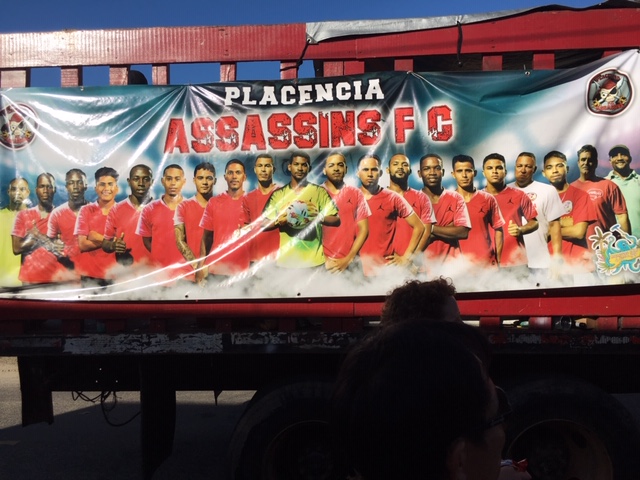 Bringing up the rear as usual was the Barefoot Beach Bar ensemble which is usually the biggest, drunkest, and loudest group of revelers. But this year’s group was surprisingly small; I think we caught them at a time when they were dispersed and refilling their drinks. 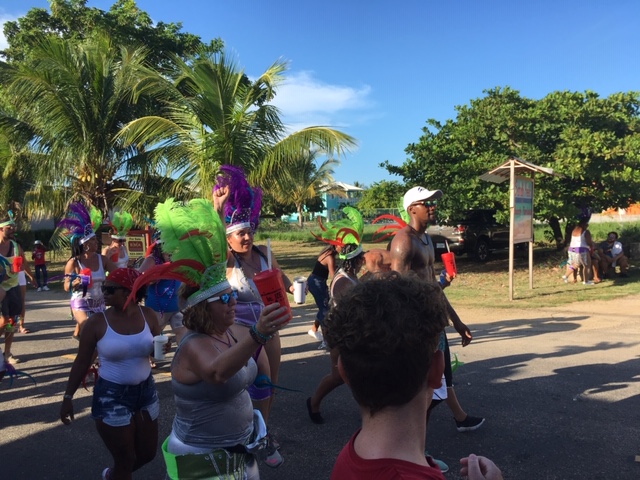 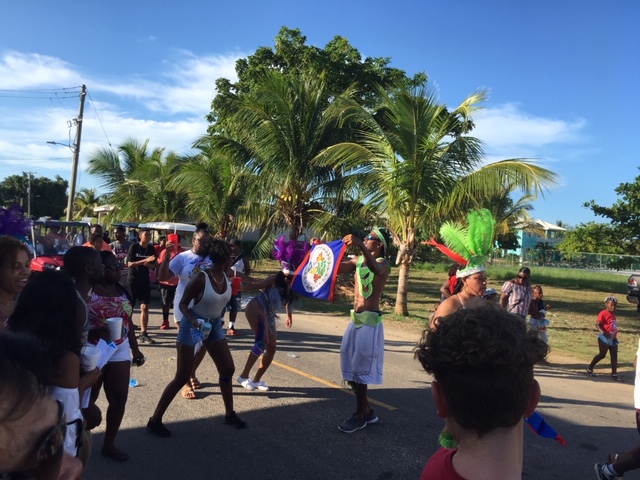 Everyone continued on to the Point for what should have been a late-night beach party but was shut down at 8pm as the police took the night off to honor a fallen brother. There was much talk afterwards that this year’s celebration was Placencia’s worst in years. I sure hope we can revive the celebration next year to be the best it can be.