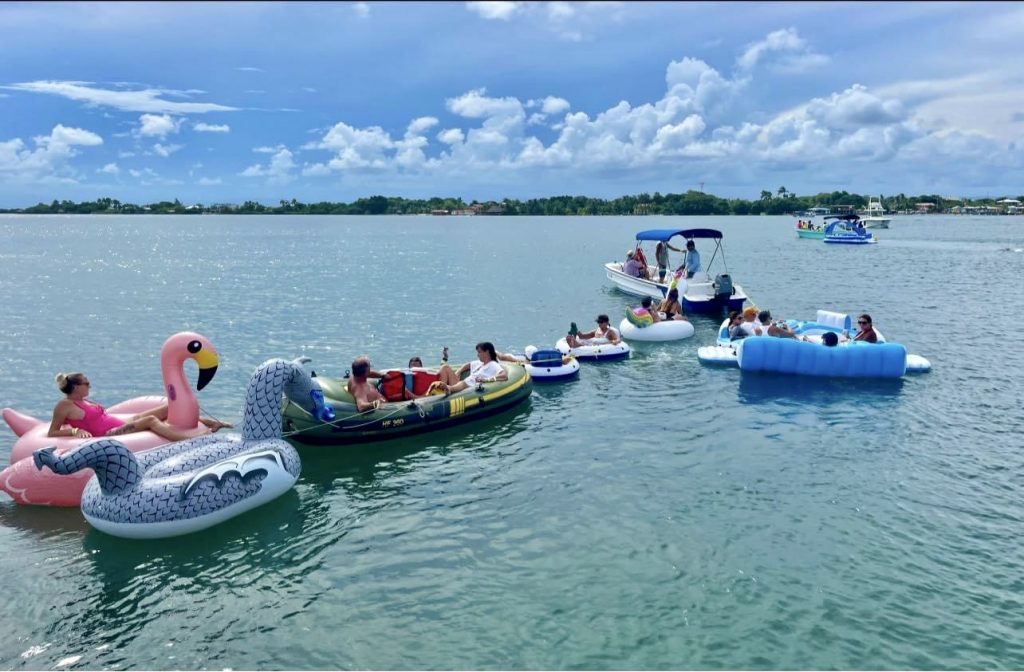 What. Flipping. Fun! After a 2-year hiatus, like so many community events, Floatchella returned (post pandemic) with a SPLASH! This was the biggest one yet at 100 participants, 6 boats, and 6 stops. We raised $5,808 for the Peninsula Volunteer Fire Department, which supports the National Fire Service here on the Peninsula. The PVF is so important because they ensure that our firefighters are always able to equip themselves properly, attend needed trainings, and simply fuel the trucks when government stipends have run dry. Imagine: in some communities, their firefighters simply can’t respond to emergencies because their truck is out of commission or they’ve used up their allotment of fuel for the month and have to await more funds from the National Service. That will never happen here because of the PVF and all of the people and businesses that support our fundraisers!

This year’s Floatchella was held on Sunday, August 13th and the weather was just spectacular. We began at Doyle’s Smoke Yaad where people assembled, fueled up with breakfast and their first rum punch, and tied up their floats behind one of the towing boats. We couldn’t do this event without all these awesome captains that volunteer their time, boats, fuel, and patience. Huge thank you to Captain Ron, The Gecko’s Property crew, Mark & Sheila from Royal Rat Hostel, Tradewinds Sailing Vacations crew, Beverly and Terry Scott, and tour guide extraordinaire- Akeem Williams. It’s no easy job to tow a dozen miscellaneous rafts and people in varying states of inebriation; and they don’t have to do it just once, they have to do it 5 times throughout the day!

When we FINALLY got all our rafts tied up and all the boats rolled out we floated through the canals on the back side of the village to our first stop: The Other Side Inn. People enjoyed the pool and punch here and the bartenders had the music pumping to get the crowd going.

From the Other Side, we continued out of Sunset Point and around to Paradise Resort for more rum punch and some games of chance against the Fire Department guys. Rock-Paper-Scissors, Flip-a-Coin, and Pick-a-Side. If you beat all 3 firefighters you won a can of Hobbs Craft Beer!

After Paradise Resort we made our way across to The Placencia Yacht Club on Placencia Caye. Caroline wins my vote for best rum punch– her not-so-secret-ingredient is nutmeg. We played a roll-the-dice-game here for more Hobbs beer before attempting our last leg of the journey.

The wind typically picks up in the afternoon and it can be a bit choppy along the sea front on some days. Our final stretch to Tipsy Tuna and Barefoot Beach Bar was looking a bit daunting and the captains made a decision to ride the participants inside the boats and just tow the empty floats the rest of the way. We landed on the beach and disassembled the raft riggings before claiming our final 2 rum punches. The firefighters were out again to challenge participants to cornhole but there weren’t too many takers as everyone was pretty tired and waterlogged at that point.

It was a long, fun, wet & wild sort of day filled with laughter and making memories with old friends while meeting new ones too. We have more bar games planned that we just didn’t have time to play against the firefighters, but that has given us our next fundraiser event idea- a beat-the-department night! Flip Cup and Horseshoes and all other kinds of games. Maybe even a big tug-o-war? I can picture this on the lawn at the Brew Barge! Can you?

Winner Winner- Everyone Gets a Chicken Dinner