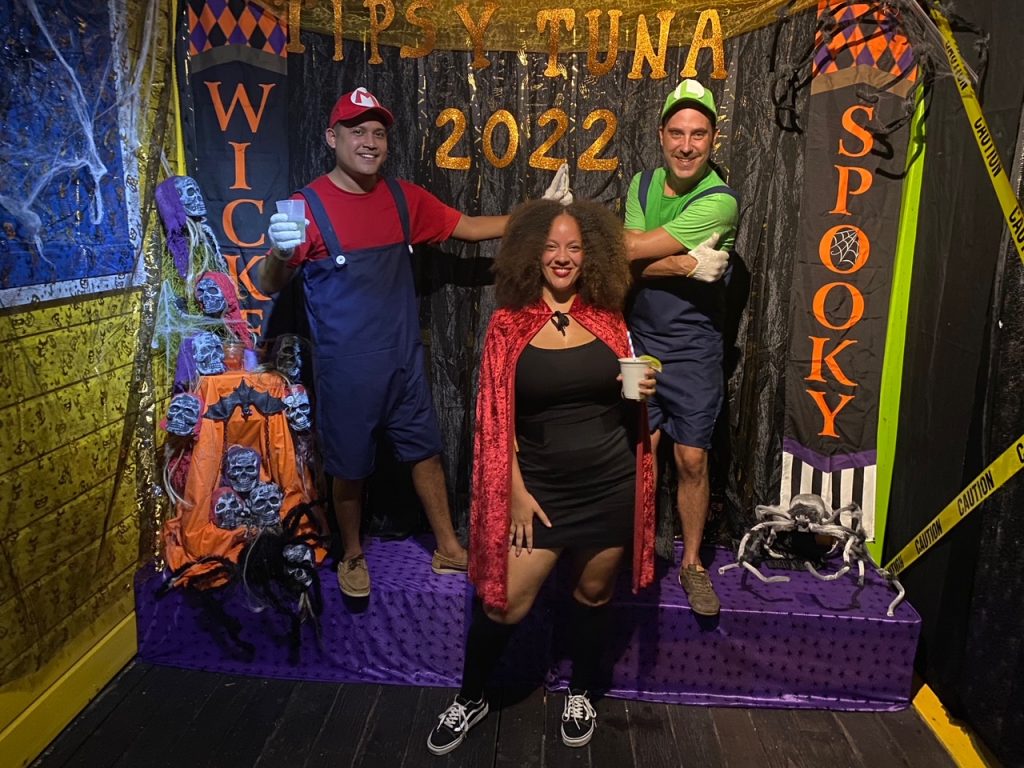 Hey hey Recessers! We’re all good here in Placencia- lucked out again and dodged Lisa. I’ll get around to telling you about Halloween Weekend now that the storm threat has passed. The Peninsula had a great, long weekend of events before cleaning up and battening down for the hurricane that fully missed us (though our friends in Belize City were not as fortunate). Here’s what we did this past week:

We went to Itz’ana on Friday night and Saturday afternoon. I saw a lot of pictures of the peninsula’s other offerings but I can say with 100% certainty- Itz’ana WINS at Halloween, hands down! Friday night was fun. We went for the Spooky Garifuna Storytelling around a campfire on the beach. It was a bit hokey (and one tale about a witch with saggy boobs that lures drunk men in to the bush to breastfeed them then whip them was downright bizarre and probably not child-appropriate) but the kids really liked roasting the complementary marshmallows. Then we stayed for their weekly beach cinema because this Friday’s screening was Hocus Pocus 2, which I’d really been wanting to see. It did not disappoint- the nostalgia! Bette Midler is an icon.

Saturday, Itz’ana threw a kid’s haunted house/ trick-o-treat/ costume contest/ spooky fun party extravaganza. They had incredible decorations and put out the cutest and most clever spread of Halloween-themed foods. The staff led tours by age group through the haunted hotel and tailored it to be scarier and scarier for the older and braver kids. I was seriously impressed with the thoughtfulness, planning and presentation… plus, it was free! Open to their in-house guests as well as community kids- all you had to do was RSVP and you could attend this amazing fete. How nice was that?!? They also had an adult’s Halloween party on Monday night but I didn’t make it to that; I’m sure it was just as spectacular.

The Croctober 5k Costume Dash (a fundraising collaboration between the Crocodile Research Coalition and the Seine Bight Youth Running Club) was kind of a flop. Only 5 runners came out, which means we ALL won, but everyone donated their prizes back to the organizer and we’ll try for a better turn out next year. Saturday night we danced on over to Tipsy Tuna for their big Halloween Bash and my ‘bush bunny’ costume won a prize, hooray!

The Placencia Beach Club organized a Trunk or Treat for the kids on Sunday afternoon. This was so great! I’ve never attended a Trunk or Treat but I know they’ve become a popular alternative in places where traditional door-to-door trick or treating isn’t a viable option. This is just perfect for Placencia and we had a great time in the Beach Club’s parking lot. Look at some of these decorations!

The Children’s Costume Parade from the Municipal Pier up to Tipsy Tuna returned this year after a 2-year hiatus and this was the first time Mitch was really old enough to fully participate and enjoy the whole night. His last minute switch from Special Ops to Hula Girl paid off and he won a prize (probably for most swagger in a coconut bra). There were a few businesses and private residences giving out candy and we took another stroll through the village following the kids.

All and all, Halloween Weekend was a TON of FUN and I’m so pleased we got to do so many great things. Tuesday was a full day of storm prep. Schools across the country were closed and only just resumed classes today (Friday). Placencia people spent a ton of time and energy securing their properties and preparing themselves for a bad storm. We ended up getting hardly any wind or rain and only lost power briefly. Because my friends are a bunch of renegades, we broke the SI to do some celebratory handstands in the empty streets. Thanks for going light on us Lisa!

2 thoughts on “From Halloween to Hurricane Prep- Weekly Recap”