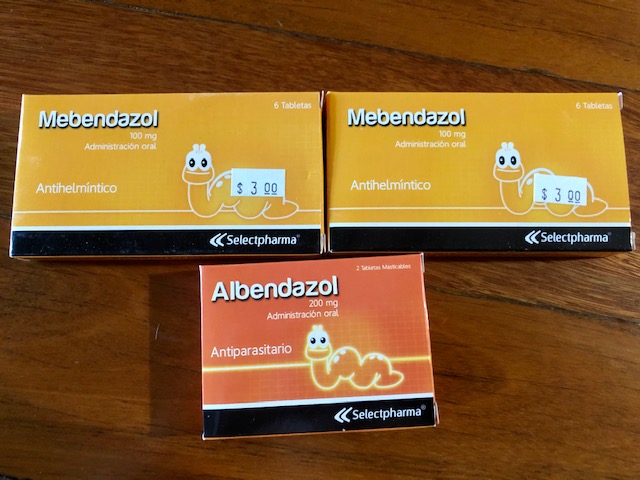 Beautiful Belize is a developing country in a subtropical climate.  It has astonishing natural beauty, friendly people and varying cultures, great food, wonderful accommodations and spectacular tours, and…. PLENTY of parasites!  For the most part, visitors and even residents, will not experience any adverse effects from parasites in Belize but there’s always a few horror stories in circulation and those are enough to keep the general public pretty scared.

I’ve always been wary of letting Mitch swim in the lagoon because of potential crocodiles and parasites.  Well, as we know, there ARE crocs in the Placencia Lagoon but historically they haven’t ever bothered humans (sometimes, but rarely, you hear about a small dog being snatched. Visit the Crocodile Research Coalition for ALL the info on local crocs).  But we also know there are a variety of parasites in the lagoon and this poses a much greater risk to humans than the crocs- just ask our friend Pam, who I only refer to as Parasite Pam now because of her horrific experience with a nasty protozoa that was nearly fatal.

We’ve been living in Belize full time now for four and half years and I’m still embarrassingly naïve and awkwardly uninformed on so many Central-American-living-and-lifestyle topics.  I have no idea what grade my son is in- Infant 2? Standard 1? I’m not sure.  Something that I had heard about in passing was the need to de-worm your kids or family.  Yes, kids.  Not fur babies, your actual human children.

I don’t remember ever getting de-wormed as a child but in Belize it appears to be and annual and twice-yearly event.  Mothers here might de-worm every September as part of their back-to-school routine, whether they think the kids need it or not.  It sounds like it could just be a preventative measure like taking a daily vitamin.

Before I get to the how, let’s discuss the why.  Why would you need to de-worm your kid?  Well, significant infections of intestinal worms can cause stunted growth or anemia and digestive issues. In the tropics, in Belize, the soil (and sand) can contain any number of parasites (and bacteria such as Tetanus, I don’t want to get in to a vax/antivax argument but everyone should be aware that the conditions in Belize are RIPE for Tetanus: hot & damp climate, soil rich in organic material, countless dogs/cats/chicken/etc wandering around crapping freely everywhere)  but most commonly the eggs of 3 types of parasitic worms.  Round, Hook, and Whipworms are all intestinal worms and soil-transmitted parasites.  Basically, you get worms from walking around barefoot.  Infection is transmitted through contact with contaminated soil; simply skin contact, you don’t even have to ingest any eggs or worms to get worms.  Gross, right?

Well, how dirty can the soil be?  Umm, I think it’s likely very dirty.  In some parts of the world the tide would rise twice a day and wash your beach clean but here there’s no perceptible tidal changes.  The number of cats and dogs that walk the village freely, pooping everywhere and anywhere they like- no one picks it up, you’re lucky if someone kicks a bit of sand over it.  Then consider that every single house is on septic.  There is no sewerage system here (or anywhere in Belize) so every toilet drains to a septic tank (hopefully).  I was ignorant of septic systems until we bought Driftwood Gardens and my initial lesson came during our first rainy season when we paid to have it pumped then astonishingly needed it emptied again a week later!  We’d had a crack in the tank and it was filling with groundwater.  But if groundwater was getting IN, it only stands to reason that waste water was getting OUT.  We spent a small fortune on repairs and upgrades but imagine how many households couldn’t afford to do that on the fly; imagine how many septic systems on this peninsula aren’t operating entirely right.  The tanker trucks that pump your systems come to the village twice a week and I can’t imagine that would be sufficient for a population this size, I just know there’s tanks that aren’t being pumped regularly if ever- it is a significant expense to pump.

So, I’m certain the soil is thoroughly infested and Mitch never wears shoes.  He goes weeks without putting shoes on and when he does it’s only because we have to go in to an office in Belmopan or something.  I didn’t suspect he had worms but after a bit of research and thoughtful reflection I came to the conclusion he couldn’t NOT have them by now.  To the pharmacy!  Here’s the how: how do you de-worm?  It is surprisingly simple- and cheap- just tell the pharmacist that you want worm tablets and voila.  I decided to do the whole family.  Mitch got a one-time dose of 2 chewable tablets and the adults got a 3-day course of one in the morning one at night for a total of six pills.  My total at check out was $9bz and no doctor visit or prescription was needed.

We took our tablets and I didn’t notice any difference but my mind feels more at peace having done it.  After talking to my friend, Dr. Marisa Tellez, who is a GD genuine Parasitologist- we don’t really need to worry too much about worms.  That having worms is a rather benign condition and you shouldn’t really de-worm unless you’re experiencing symptoms because over medicating can pose a potential problem.  Hosting a certain amount of parasites is normal, maybe even healthy… and she’s an expert!  She recommends certain natural measures you can take if you’re concerned about worms.  Mainly, she recommends ingesting papaya seeds because they create an inhospitable environment for worms in you gut and intestines (something about pH levels maybe, I forget- we were drinking while having this discussion). You can pulverize the seeds in the blender with your regular ingredients for a smoothie or swallow then whole like tiny pills. Whiskey and vodka are apparently anti-parasitic as well… whoop whoop cheers!