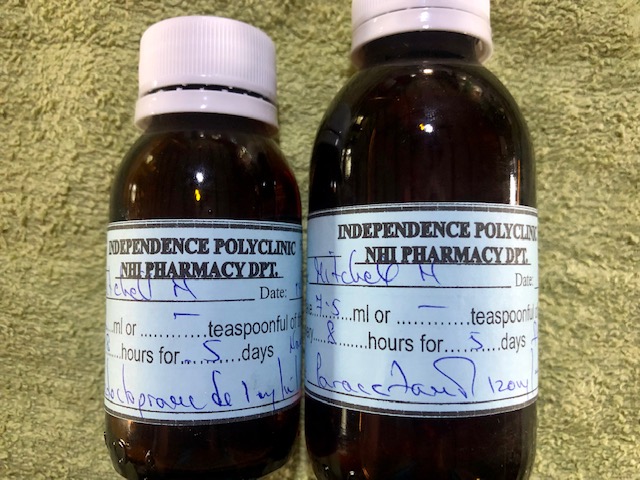 After our Caves Branch adventure Mitch had a bit of tummy trouble.  Well, really it started during our Caves Branch stay- what a shame!  My little man was SO excited to sleep in the bunk bed… but in the middle of the night he vomited all over the top bunk.  Then an hour later, threw up all over the bottom bunk.  He soiled his shorts before breakfast, puked by the pool deck and continued to get sick all over Belmopan as we frustratingly tried to sort out some car issues we were having.  What a day!  He was a little trooper though, such a good boy until we could get him home and resting in his own bed.

He woke up the next morning and still couldn’t keep down a couple of ice cubes so I knew he needed to see a doctor.  Mitch is already so slim that just 24 hours of illness had him looking downright emaciated.  I messaged Dr. Alexis, the private clinic physician here on the peninsula but he responded that he was away working in Belize City that weekend.  So, I biked down to the Placencia Polyclinic at 9am on Saturday to see if a doctor would be at the public clinic.  Nope.  No doctors on the peninsula this particular day. I felt awful subjecting him to it, but our best bet was a water taxi to Independence/ Mango Creek and a cab ride to their polyclinic.  Independence is a much larger village with a bigger clinic that is always staffed.  I thought this would be an easier commute than the long drive to Dangriga or Belmopan hospitals.

He continued to be a stoic little soldier on the quick $12bzd Hokey Pokey ride and the $5bzd taxi to Independence Polyclinic.  They were busy!  We were asked to wait in an outbuilding next to the main clinic before Mitch could be admitted for treatment.  By this point he had a slight fever so they gave him Tylenol for that then administered an IV for his dehydration.  He took a rest in the treatment room during his drip while the doctor and nurse stayed busy triaging emergencies over at the main building; a young boy had been hit by a car and needed to be stabilized for ambulance transfer to the hospital in Dangriga.  I was a nervous wreck over my baby getting an IV- I can’t imagine what that boy’s mother was feeling!

When his fever was down and the fluids were finished, they drew blood samples to sent to the lab on Monday.  I was pretty sure dirty river water (accidentally swallowed while swimming) was the culprit but I wanted to know precisely what caused the illness so we would know if additional treatment was needed.  My friend, Pam, picked up a parasite at the beginning of covid lockdown measures while swimming in the lagoon; she nearly died!  She was sick for weeks, hospitalized, slowly recovered and now has the nickname Parasite Pam (I’ll never not call her this haha!).  I was praying Mitch wouldn’t have a long-haul sickness or reoccurring problems from an improperly treated infection.

I have no complaints about the care we received on a Saturday at the Independence Polyclinic.  Mitch looked like a new man after his IV and we were sent home with medicine- not just prescriptions, the on-site pharmacy gave us the medicine right there and then- for the next few days.  We received an anti-nauseous medicine, a liquid Tylenol if the fever returned, and a healthy dose of amoxicillin.  I was told to follow up with the Placencia clinic regarding the blood work results at the end of the week.  I figured if Mitch took a turn for the worst again, I would just take him directly to Belize Healthcare Partners in Belize City.  That is our preferred private hospital- it’s who saved Parasite Pam and also where my friend had an emergency hysterectomy and another friend was treated for deep vein thrombosis- and I have always planned to use them for any major care requirements.

Mitch finished his antibiotic and didn’t need any doses of the other medicines (though I’ve added them to our family first aid kit just in case!).  He hasn’t fell ill again and though his appetite is slow to return I’m not all too concerned because he’s never been an eater. Lab work took a week and a half to come in and results were inconclusive, he was negative for the typical tropical viruses (Zika, Dengue, chikv) so we don’t know what little nastiness caused his trouble but the amoxicillin seems to have done the trick. All this cost me was the price of transportation. Public clinic visit, medication, and lab work was zero dollars and zero cents with our Belize Social Security Cards.