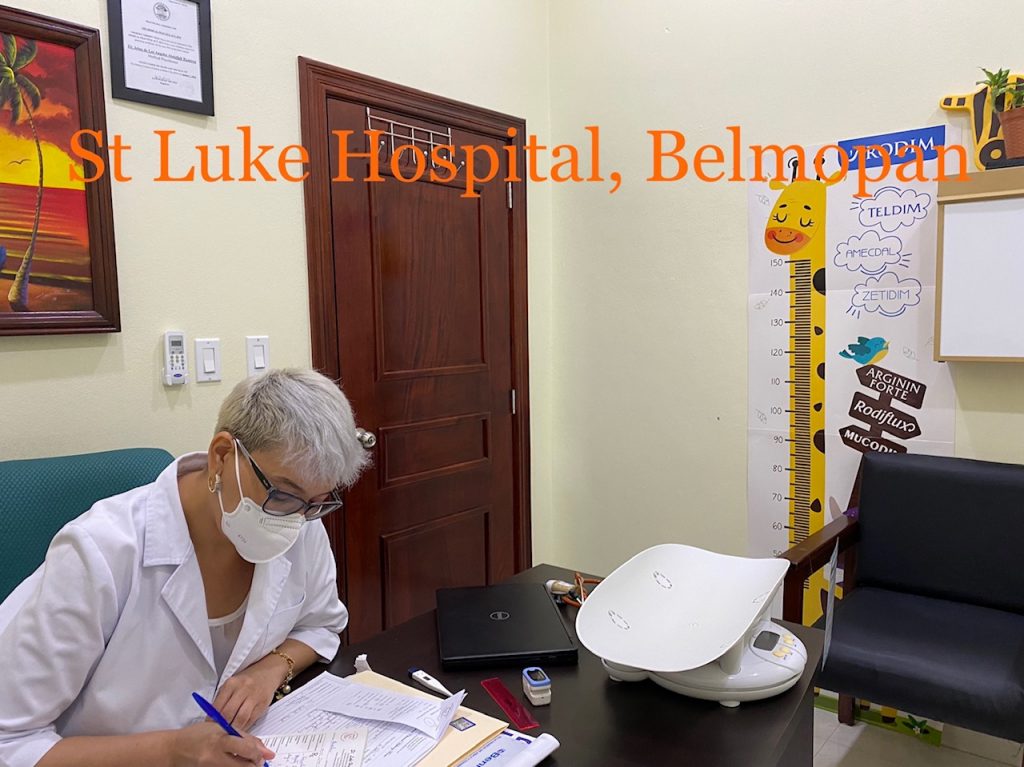 St. Luke is my new go-to for urgent or urgent-ish health care. Immediately following our friends’ wonderful experience there with the pediatrician, we were convinced to try them and I’m so happy we did. They’re a one-stop-shop, very reasonably priced for a private hospital, and located in Belmopan (so a much shorter drive for us than going to Belize City). Here’s a quick re-cap of our recent experience there and what it cost.

My little man, Mitch, has always had a good strong immune system. He rarely gets sick and when he does he is super quick to recover but over the past 8 weeks or so he’d been plagued with mild, reoccurring illness. A fever and fatigue that would come and go, random headaches and nausea, an eye infection, intermittent cough and congestion– he was loosing his reputation as a healthy kid! I was just treating symptoms at home as they popped up; Tylenol for the fever, antibiotic drops for the eye infection, and plenty of rest when he was feeling run down. I kept chalking it up to a growth spurt or the heat (he was still active in camps and such) but he just couldn’t seem to get himself fully recovered.

We were on our way to Belmopan to attend the horse camp at Banana Bank (a crazy cool place just outside the capital, read more about it here) that our friend’s 2 little girls were also going to. The night before camp began it became clear that the younger sister wouldn’t be able to go as she was feeling quite under the weather so we made arrangements to drive the older sister while they sorted the other out. Mitch and his friend were rambunctious the whole ride up to camp but they both faded quickly by late afternoon. Mitch was asleep before dinner and our friend had such a sore throat she couldn’t do more than pick at her food. Meanwhile, the younger sister had been brought to St. Lukes and was being diagnosed and treated for Strep and pneumonia and a UTI and mild dehydration… fun! So the next morning they swapped out one sister for the next at the pediatrician and scrapped horse camp all together but said they were so pleased with the level of care the girls received and what wonderful services St Luke provides.

I was running errands in town while Mitch was attempting the first full day of camp but I got a call around lunchtime that his fever was back and he’d gone to the room for another nap. I figured we would give St Luke a try too since we were already up there and our friends had been so pleased with it. We were also really happy with the facility, the doctor and staff. The on-site laboratory was so quick to return the bloodwork results and we had a diagnosis in a little over an hour.

Dr. Abdallah saw us after a very short wait and knew precisely which labs to order after a brief assessment; just as she suspected- Mitch had a salmonella infection. Not too uncommon and he could have picked it up anywhere and had it for weeks. He was meant to give a stool and urine sample along with the bloodwork to check for secondary infections/ parasites but he couldn’t ‘deliver’ on those at the time. We paid $90.79usd for the doctor’s visit and bloodwork and $28.37usd for a week’s regimen of antibiotics and fever medicine.

After completing the round of medication we returned and submitted the stool and urine analysis ($55.49usd for that lab) and followed up with the pediatrician (no cost for follow up visit!). Mitch was found clear of infection but Dr. Abdallah reminded us not to neglect our bi-annual de-worming. I’m going to get on a schedule I think: September, start of school and March, spring break. It’s cheap and painless and part of tropical living I didn’t know about, read my DIY De-worming post to learn more about the how and why.

I will likely just go to St. Luke from now on whenever we have a need more serious than an ear infection. They have a variety of specialists onsite, equipment such as x-ray and ultrasound, and the 24 hour lab and pharmacy right there. It’s so convenient, not too costly, and I have confidence in the care… St Luke’s for the win!

Healthcare in Belize- Chiropractic Care comes to the Peninsula