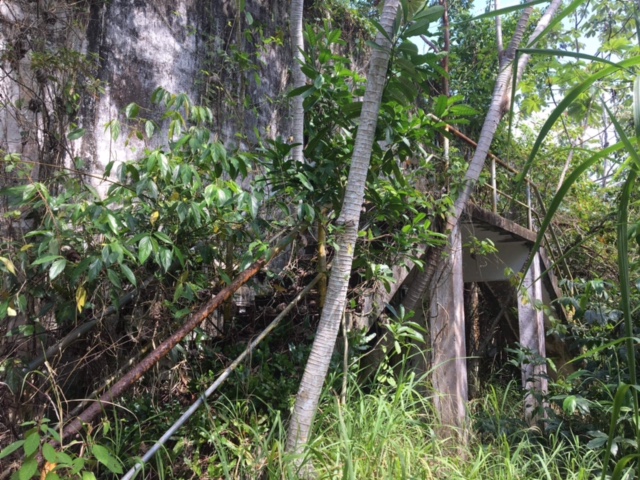 I have an explorer’s spirit.  I want to make the most of every adventure.  If presented the option- I’ll happily choose the road less traveled.  I don’t necessarily go looking for trouble… but sometimes expeditions turn in to incidents.  So far, they’ve never resulted in death or dismemberment but we’ve encountered enough trials and tribulations on these excursions that my friend Cindy doesn’t fully trust me to lead adventures.  That said, she’ll still acquiesce a couple times a year and indulge my folly.

When I told her about an old, abandoned prison somewhere between Mayflower Bocawina National Park and Pomona village… she wasn’t overly excited.  Actually, she was only marginally intrigued and largely skeptical.  But we were already in the area stealing air plants from orchards and I had an ally in Amanda, who’s appetite for adventure rivals mine.  We convinced her!

We had GPS coordinates and we used Google Earth to find our way.  Driving down a dirt road off the Southern Highway just before the Dangriga junction we first found this grand, old, abandoned estate with some rather sinister graffiti.  We didn’t explore more than 45 seconds because it wasn’t wholly abandoned, someone else who probably wasn’t supposed to be there was there and we got spooked and ran away.

After some more rough roading and plant pilfering we arrived to a location I thought we should leave the car and continue on foot.  We found some trails.  Followed some trails.  They weren’t the right trails.

Then we found the trail Amanda and I thought, “for sure this is it, we’re so close!”  The trail started off overgrown and became nearly impassable until it petered out altogether.  Cursing me, Cindy was ready to give up and go find a beer but Amanda and I begged for another try—an approach from the other side.  So we trooped back to the car and continued down the dirt road to a large school, vacant but not abandoned.  My research had told me that the prison was originally an agricultural college before it’s penitentiary period and then a school briefly again before being abandoned for good.  But this school wasn’t it and I couldn’t see any remnants peeking through the jungle around to suggest that the relic was hidden beneath.

We were about to admit defeat when a random Rasta popped out of the shutter school.  It was George, one of the rotating security guards there during its covid closure.  Thank Jah for George!  He knew exactly what I was talking about AND how to get there.  He grabbed his boots and machete and jumped in the car with us… back to the trail we’d originally been on!  We knew it- we were so close!  George was trail blazing.  He was bush whacking.  Then, again, we could beat our path no further.  A tango of emotions dancing through me like the mosquitoes dancing in the humid air around us- frustration and disappointment.  I could feel Cindy breathing down my neck; the words “I told you so” on the tip of her tongue.

George knew another way- equally as overgrown- but we were able to pick up the path, chopping and scrambling up a hill thick with vegetation.  This rarely visited landmark has apparently not been visited AT ALL since the pandemic began and the jungle was doing a bang-up job reclaiming its territory.  We couldn’t even see the buildings 20 feet from them!

Everything worth stripping from the buildings has been removed: bars, windows, furniture, fixtures- down to the wiring.  There’s nothing left in the buildings aside from, curiously, a surprisingly well-stocked library.

Amanda was on cloud 9- she filched a hawk skull and some moldy books as a souvenir. Cindy and I were quite happy with just our photos and memories of the deserted prison and having made a new acquaintance in George.

I can’t wait for the next (mis)adventure!

An Overnight to Belmopan and Agua Viva