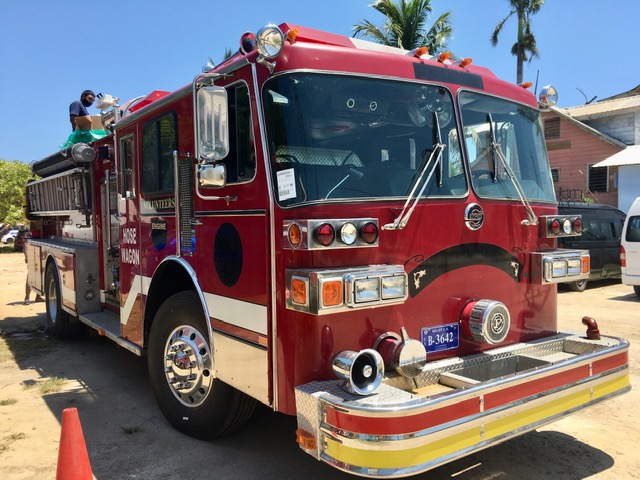 Look what rolled in to the village this afternoon! Wooohooowooohooowooohooo- clear the way, hot stuff right here.  One of two new (new to us, they’re refurbished trucks from the US) trucks to serve in Stann Creek district.  The other one will be in nearby Independence town and help serve to greater Mango Creek area.

These trucks came to us from South Carolina (and this one had been used for 20 years not far from where I grew up- West Chester, Pennsylvania! Small world).  They were decommissioned and local realtor/ broker (at REMAX 1st Choice Belize), David Kafka, purchased and paid for repairs on them so that they could have a second career in Belize and serve our growing communities.  David was a firefighter in his former life, before moving to Belize from the US.  He used his old connections to find these fantastic trucks and work his magic to get them ready for him to donate to the National Fire Service.

The trucks arrived in January on a HUGE cargo plane at Philip Goldson International Airport through the Denton Program.  They were each fully kitted out with equipment and gear.  This was a big get for our communities; Placencia will be taking first choice of supplies but will share surplus with neighboring stations in an effort to ensure that everyone has essential and life-saving equipment.

Now if you’re a regular reader you might remember I’m on the board of the Peninsula Volunteer Fire Department as co-chair with Cindy Flowers for fundraising. (read about past fundraisers such as Floatchella and the Scavenger Hunt)  While the GOB funds the National Fire Service, the Volunteer Fire Department still maintains fundraising efforts not only to secure more and better equipment but simply because the annual operating budget provided by the NFS simply isn’t sufficient- especially in rapid growth areas like Placencia Peninsula.  We have this one fire station, minimally staffed, that needs to service neighborhoods stretching 20 miles up the coast.  When the month’s allotment of fuel has been used…that’s it!  The truck would sit empty and useless until the next stipend if it weren’t for the Volunteers making sure enough funds are found to guarantee that every call can be responded to.

Current and future plans for the Fire Department are:

-Securing a location further up the peninsula to house and man one truck to more quickly respond to the communities of Maya Beach, Plantation, and Riversdale. This may sound unnecessary but remember, there are 29 speed bumps between the current station and the hamlet of Riversdale. When minutes matter, there’s no way around the slow progress a truck can make from end to end of the peninsula; having a second location of first responders could make all the difference.

-Continuing and expanding community education and trainings. Resources will likely always be stretched here but if the Fire Service can help the peninsula’s population become mindful of prevention than many problems can be avoided all together. Similarly, if an emergency does arise and community members are offering assistance, training will be beneficial so that they can help efficiently and avoid any injury.