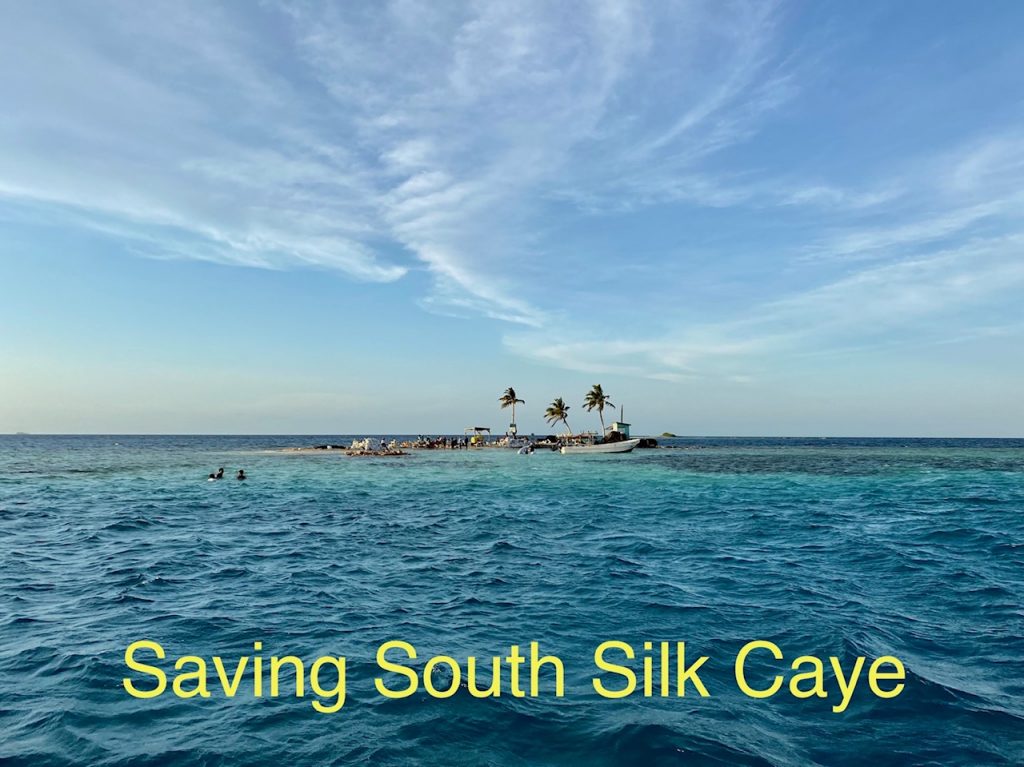 This weekend something remarkable happened. An intense undertaking and an impressive cooperative effort by community volunteers and stakeholders in the Blue Economy. Residents of the peninsula banned together to re-build the rapidly vanishing Silk Caye, an important public island that many tour guides rely on for their livelihoods and many local families enjoy for leisure. The caye is in a marine reserve and open to the public like any other national park but this little gem has been losing ground to erosion for a number of years and was in danger of washing away completely. There’s been an outcry to do something to safeguard the island for some time but nothing was being done so a grassroots community effort made it happen.

We can move mountains

I was shocked by the size of the project and the power of the people to accomplished this shared goal. This wasn’t what I was expecting when I heard their was a community effort to secure the caye; I thought a dozen volunteers would place about a hundred sand bags and consider it a victory. No! This was thoughtfully planned, incredibly well-funded, and skillfully executed. The magnitude of this project is monumental. The materials alone made my head spin. Hundreds of thousands of pounds of stone, sand, and gravel. Chain link fence, palmetto sticks, pallets of cement, boulders! A cement mixer and generator to run it- all brought out on personal watercraft and moved by volunteer people-power.

Fi all a wi

It was a sentiment that was repeated throughout the weekend, and the answer to why this needed to be done. This caye needed to be saved ‘fi all a wi’ (for us all) and so that a future generation of Belizeans and visitors can enjoy it. The passionate people who orchestrated this weren’t going to wait for the government to do something, they’d already waited this long and nothing had been done, they took matters in to their own hands. Members of the local marine tour guide organization and the Southern Environmental Association made plans, gathered donations, enlisted volunteers and took action to sure-up Silk Caye for everybody before it was lost to everyone.

Eworth Garbutt really spearheaded this project; he had the most skin in the game, as the saying goes. Eworth and his staff at the marina organized all the boats, materials, meals, and man power. They gathered the donations and consolidated the effort to execute a concise plan. At great personal expense and the commitment of his time and talents, Eworth put this project to action and refused to abandon it even after the Coast Guard came to order them to stop.

I applaud Eworth Marine and all the tour companies and all the business owners and private entities that pitched in to make this happen and I want to thank Eworth for letting our family volunteer and be a small part of the restoration. There was so much comradery, joy, and pride in the people that were out there working to save this little slice of sand. Maybe one day Mitch will take his children there and tell them about this weekend of work and what a community can do for themselves.

I hope to share pictures of the completed project with you in a few days but I understand that the Coast Guard once again made an attempt to halt progress the second day of reclamation. I can’t imagine that anyone with half a brain would want to stop this initiative and leave a half finished project but odd things happen and money talks. Perhaps someone in government wanted their family member to receive the conservation/ construction contract at an inflated cost and isn’t happy that a bunch of local yokels did what they would have in a single weekend with a completely unpaid crew.

I found this article (Saving the Silk Cayes in Belize) from Jan 2020 that mentions a 2-year, multimillion dollar preservation project to protect Silk Caye and names a collaborating foundation that I’ve never heard of before…. curious.

For (professional, really nice) pictures of the second day, click here for a gallery by Benedict Kim of Esoteric Vision Photography.