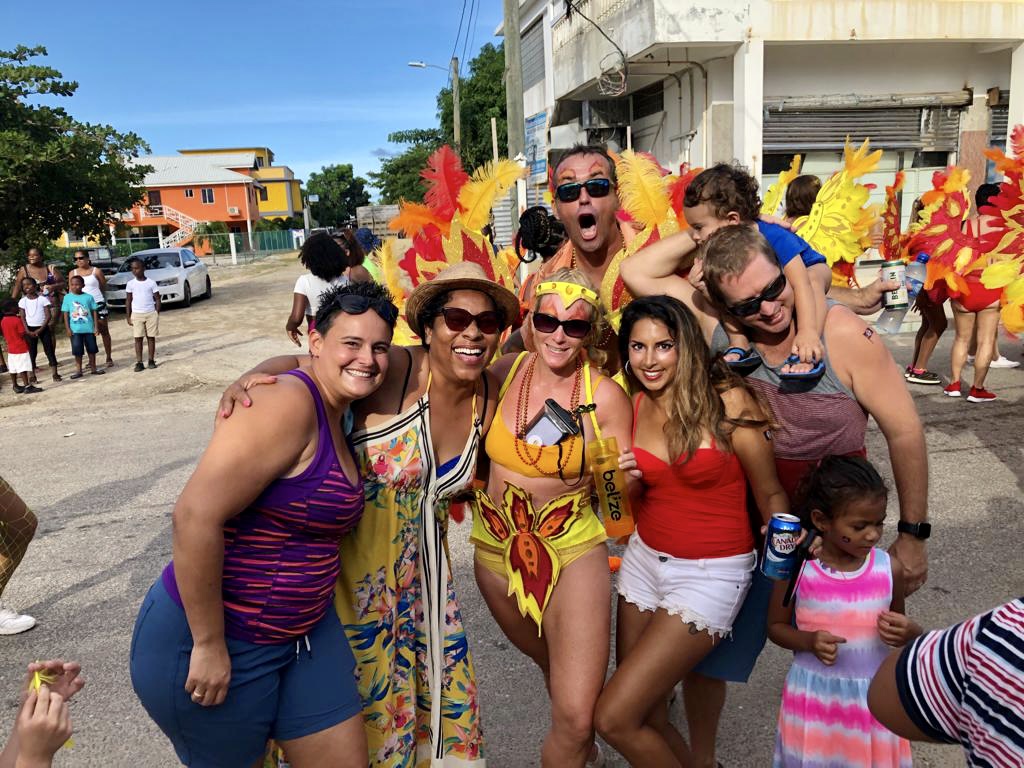 September is drawing towards an end and the Atlantic Hurricane season is ramping up in earnest. Here is Placencia we’ve been getting buckets of rain overnight… nearly every dang night. That means that no matter how brilliantly the sun shines during the days, we’re still dodging tadpole-filled puddles around town. The sea has been just beautiful though- calm, clear, flat as a lake most days. Here’s a quick recap of the trouble we got up to this month.

Back to school! The kids are back to school and Mitch has returned to Peninsula International Academy and is really enjoying classes there. The It Takes A Village Youth Center is open again for their fun and free after school program so he’s been going there until dinner time most weekdays.

Fancy events! Oh la la, sometimes we can go weeks and weeks on end without ever getting fancier than shorts and tank tops so when there’s an occasion for me to wear mascara or for Phil to put on a real shirt… well! It feels quite special. We attended an industry/ partnership night at the ever-impressive Sirenian Bay Resort. We go to the gym here nearly every day and I’m always peaking around at the rest of the property and spying on whatever next project they have in the works because- DAMN- this place keeps getting better and better. We also went to a friends wedding at Itz’ana that was out of this world. Holy cow, they did everything right: a beachside ceremony in which they released 100 Blue Morpho butterflies, cocktail hour around the pool, the best food I’ve ever had at a buffet, and an absurdly fun dance party in the Biblio Bar. Unforgettable fancy fun! If you’re planning a destination wedding, either of these resorts would be my top picks.

All the parades! I’ve said it before but, you can’t throw a stone in Belize during September without hitting a GD parade. The Fireman’s (and other public servants such as Police and Ambulance) Parade, the Children’s Parade, St. Georges Caye Day Parade, Jouvert, and of course–the 21st of September, Carnival parade. Whoop whoop! A lot of fun was had and a lot of rum was had. Nothing says “party” like a bleach bottle full of Bittas

BEL is on some bullshish! The entire month the power has been consistency inconsistent. Electric and water interruptions can be counted on to occur more frequently this time of year anyway. (whether its a matter of weather, increased load demand, or because they think its a good time to mess around or re-run/upgrade things during the slower tourism months… I don’t know) But we’re having multiple power outages per week. A lot of the time its been overnight and I can chalk it up to those torrential nightly rains but some times it’ll go out during the day for no apparent reason. Not for a long time, sometimes no more than a 60-secong- blip but it’s enough to reset my washing machine cycle and annoy me.

Those are the highs and lows of the month. We’re gearing up for Jessy’s wedding in Maui, Mitch’s first extended stay at his grandparents without us, and a Belize visit with my mom and aunts in October.

What to do this weekend in Placencia