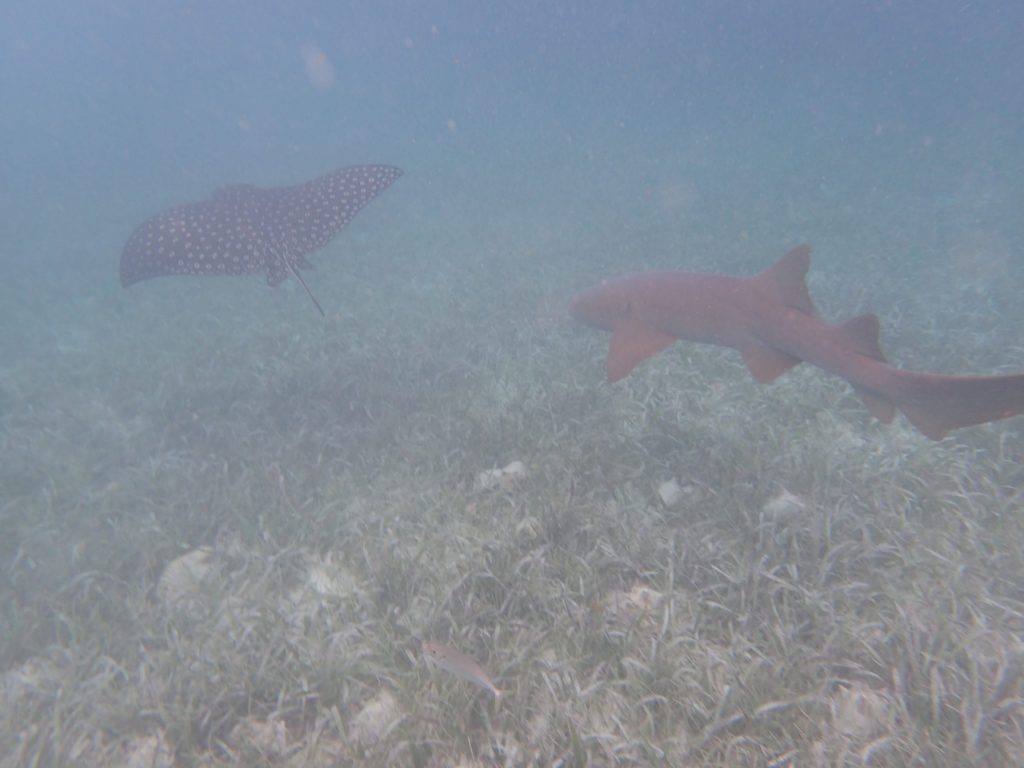 The wonderful staff at Ray Caye took us on a quick (as requested because many little children were in tow) excursion over to the famed “turtle alley” just past Silk Cayes.  They provide great guides, equipment, and about a bajillion towels.

Earlier, I’d practiced snorkeling with Mitch around the dock at Ray Caye to get him comfortable in open water.  There’s loads of sea fans, coral clusters and healthy happy fish to see directly from shore all around the island.  Though my little man isn’t a strong swimmer (he will NOT go under the water for all the tea in China) he was doing surprisingly well piggybacking me and looking through his mask.  I was so excited for him to swim with the nurse sharks out at the “alley.”

Many people find snorkeling off a boat rather than from the shore much more intimidating, and I understand.  It’s a bit unnerving to fall in to open, deep water… especially when there’s a buncha dang sharks circling underneath!

But Mitch did it!  I was so so impressed and pleased with him.  For about 30 seconds he swam (read- clung to Dad like a barnacle) and watched the sharks through his snorkel mask.  Then he got back on the boat.  But I was fine with that- he DID it!

I went off in search of the turtles we were promised and found one.  It was camera shy.

There were plenty of spotted eagle rays gliding around along with the less glamorous roughtail stingrays but the main attraction here are the big, docile nurse sharks.

They’re so easy-going, some of them seem downright comatose.  I’m sure you aren’t supposed to pet them but I can never restrain myself, and they seem to enjoy it- or at least be totally indifferent to it.  Shark selfie!

You of course don’t need to spend the night out on a private island resort in order to experience the shark and turtle snorkel at Silk Caye (but if you can, why wouldn’t you?!); you can take a delightful day trip directly from Placencia which will include lunch and maybe some other island hopping.  I recommend going with Edlin from Placencia Fishing Charters and you can probably do some trolling while you’re out at the reef. (But not in the marine reserve, obviously)