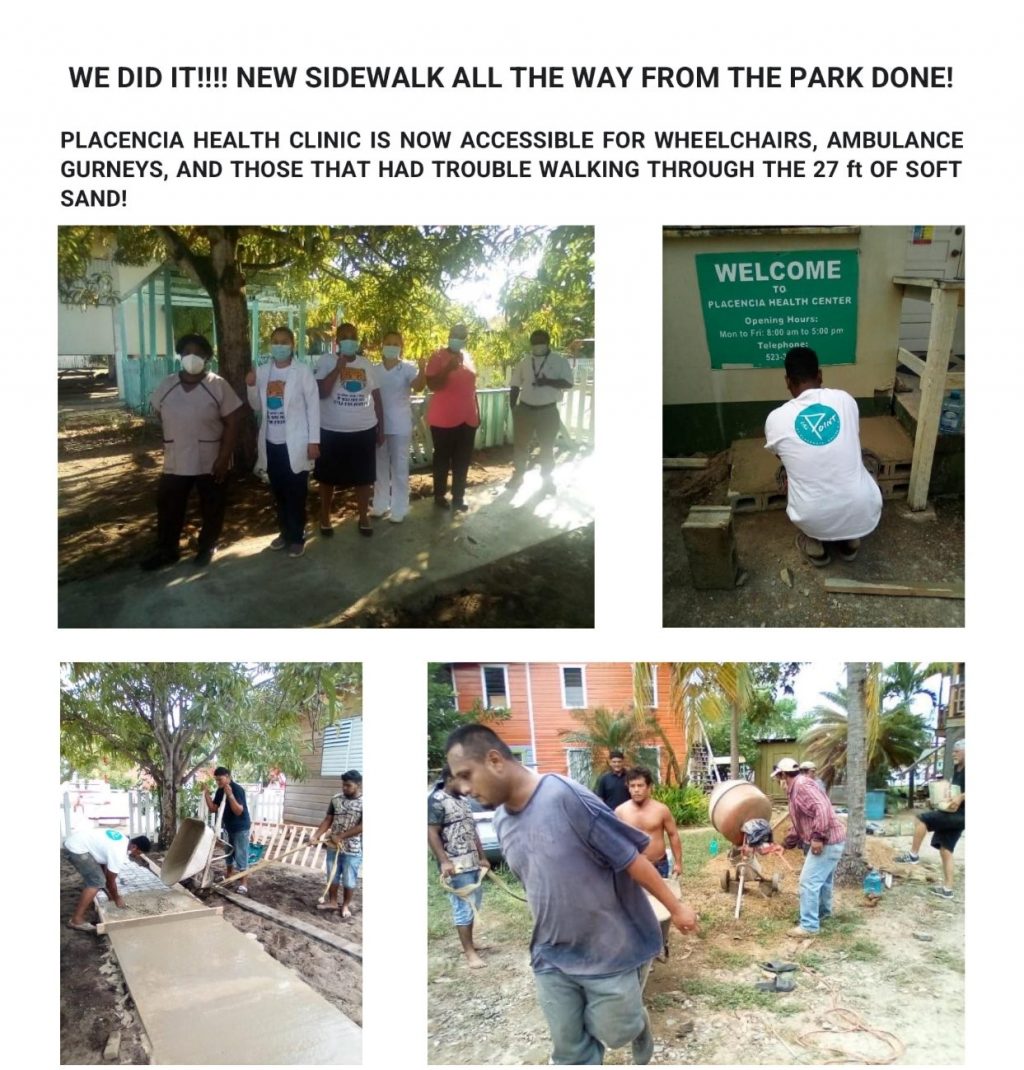 I wanted to share with you a Facebook post from Placencia Village Council. I try to keep this blog fun and positive but truthful. I know a large percentage of my readers are aspiring expats and I aim to share with you guys honest, real-time experiences of expat life. So, I have mixed feelings about this PVC post because, while I’m so happy to see the community come together and take pride in an improvement, I’m sort of shocked that there was a necessity for this project to begin with. Come on, it’s 2022. You’re telling me your Health Clinic hasn’t been handicap accessible until just now? I mean, I suppose I shouldn’t be surprised. Utterly asinine things happen here frequently; for example, when a government office runs out of their paper receipts and literally come to a stand still until a new book is procured. (and before anyone jumps down my throat, I’m not saying silly stuff doesn’t happen all over the world… it just seems like sometimes Belize is the epicenter of inefficaciousness)

I think it is important to share information like this to potential transplants. Moving here for an extended stay is A LOT different from visiting here on vacation. When people ask what it’s like to move to Belize, I say, “It’s easier than you think, and harder than you can imagine.” Most expats don’t stay forever; the vast majority leave within 24 months. But it doesn’t dissuade others from trying. Dozens and dozens of properties on the peninsula have sold last year to foreigners. The thing I’m not certain they’re aware of when they invest in a property here (I certainly didn’t understand when I bought my place) is the scope of infrastructure that is in place… or rather, the lack of it. What a small thing: the lack of a sidewalk from the car park to the clinic. Yet, it has taken this long for something to be done about it.

If you’ve purchased property here or are considering doing so, that’s great! I’m not saying you shouldn’t, I’m just saying you should remove those rosy, rum punch goggles and take a critical look at the place. Then I challenge you to be a good neighbor and contribute to community improvements. We don’t want to change Placencia. We don’t want this place to be a “little America” (or Canada or France or UK or wherever) but we do want it to be the best Belize it can be.

Kudos to everyone that helped make this sidewalk a reality. I’m excited to see what else we can do in 2022!

WE DID IT!!!! NEW SIDEWALK ALL THE WAY FROM THE PARK DONE!PLACENCIA HEALTH CLINIC IS NOW ACCESSIBLE FOR WHEELCHAIRS, AMBULANCE GURNEYS, AND THOSE THAT HAD TROUBLE WALKING THROUGH THE 27 ft OF SOFT SAND!On Saturday 12 December, 2021, the form boards were put in, and all the loose sand shoveled away (work done mostly done by Paul) so we could cast on Sunday 13 December, 2021.There was an emergency on Saturday, and because Paul had brought the path to the hard underneath, the gurney was able to be rolled in for the first time in months. In fact, Nurse Rosa told me that in some cases, they needed 10 people to carry a gurney over the soft sand!On Sunday, the helpers that came to help, were:Omar Miranda (contractor), Paul (volunteer), Thomas (sent by Ocean Breeze), Craig (Toucan Jack), Ewa (Be Back Rental), Contras & Jeiro (both sent by The Point, who when Emilio saw we needed more help, sent two more of his workers!), Paul Nunez (volunteer), and Chabo (sent by Ewa).Mixing was done behind Dawn’s Grill, with water and electricity donated by Jordan. It was incredibly hard work to bring in the mixed wet cement, through the 300 ft of soft sand! One person, had to pull with a strap while the other pushed the wheelbarrow.When Craig lent us another wheelbarrow, and the extra guys from The Point showed up, we were able to speed things up!We were very lucky to have Contras, the Maestro, doing the levelling work. What a great result! Such a smooth sidewalk!We also cast a floor in front of the covid building so people no longer tripped. In addition, we build some stairs so that the doctors and nurses would have easier access into the building.Unfortunately, the huge tree, which provided shade on the side of the clinic, had been cut down as the owners are building a house on their property. Especially with the covid 6 ft distancing rule, we needed more shade. Because of all our generous donors we were able to buy an extra tent.We had a donation of the cement from MnM, and a donation of the sand and gravel from AL Construction (Lowen), as well as a roll of construction plastic from The Point.

Money to achieve the project, was donated by:Deborah Mueller, Claudia (One World Gift Shop), Ewa (Be Back Rental), Ms. Janice Leslie (Trade Winds), Go Sea Tours, Susan Su(9 to 9), Omar’s Restaurant, Uncle’s Store, Everyday Store, Amy’s Store, Smoqiz Restaurant, Mings Store, Van der Ploeg’s, Ocean Breeze Hotel/Toucan Jack Tiki Bar, Literary Lizard, Gissella, (Bomboyaz), Wallen’s Hardware, Chiachi’s Restaurant, Clive Vegetables, Gary & Shelley, Rick’s Cafe/Restaurant, Nemethy’s, Jackie (Brewed Awakenings).We also had donation jars at:Rick’s Cafe, Pickled Parrot, Brewed Awakenings, Ocean Breeze/Toucan Jack, and Placencia Pharmacy.Thank you for all those donations!We are very thankful for all the donations, the help, and the support to make the building of the sidewalk access to Placencia Health Clinic a success, and at such great speed!The staff and frontliners at the clinic, work very hard to keep our village safe! Thank you for all you do!Any donations to the Placencia Health Clinic, of medicines, masks, or equipment would be very helpful, as there is a shortage of all!

Placencia Clinic, for those not from here, is located behind the St. John’s School, beside the BTL Park.— Ewa