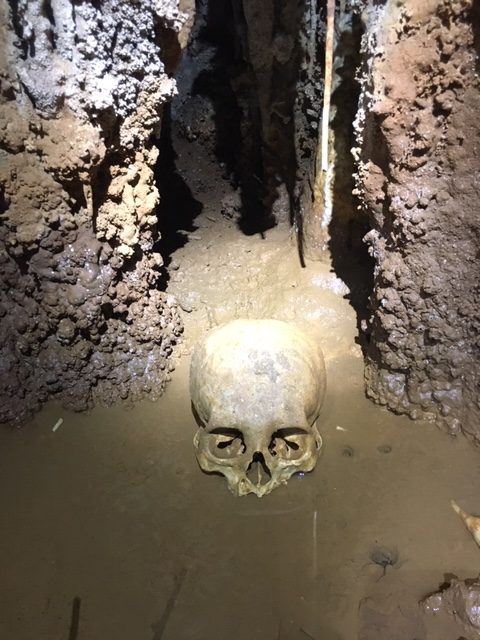 Okay wow!  First of all, Sleeping Giant will astonish you with their property- the views, the rooms, the restaurant, the incredible grounds.

But they also have exclusive access to a magnificent cave and I took the tour yesterday… it’s hard to describe such a place, one of those you have-to-see-it-to-believe sort of things.  Firstly, the cave is MASIVE!  It’s theorized it’s the largest dry cave system known in Belize at the moment.  The mouth of the cave is so impressive that when our ladies group hiked to it last year half of the group felt too intimidated to venture even a few feet inside. (they said they could feel the spirits of the sacred place and they might have been right!)

But during the guided tour (complete with helmets and head lamps) you spend about 2 hours venturing in and then out of the cave.  I don’t know what its total distance is but each new chamber you enter is impressively as large as the previous: cathedral-like throughout!

Aside from its grand scale size, the cave is also impressive in its density of artifacts.  Inside the huge ceremonial chamber you can hardly take a step without fear of treading on ancient pottery shards.

And remains! Skulls and bones scattered about tell a story of human sacrifice.

We were awed by the natural formations: stalagmites and tites, columns, flowstone and rimstone pools.

There must have been loads more treasures hidden in this cave before it was officially rediscovered but our guide guesses that looters removed most of the valuables years ago.  We got to hold a precious jade bead though and sniff at some copal resin that could have been used in ceremonies a thousand years ago!

Caves are cool!  And this one is especially cool because of the small number of modern people to have been allowed to enter; making it feel like an authentic archeological site.  I’m often struck by the personalized and unique experiences available in Belize and this is certainly one of them; yes, it’s an excursion for tourists but holy moly is this intimate experience drastically different than any Cancun style, assembly line type tour you would get elsewhere. An only-in-Belize adventure!