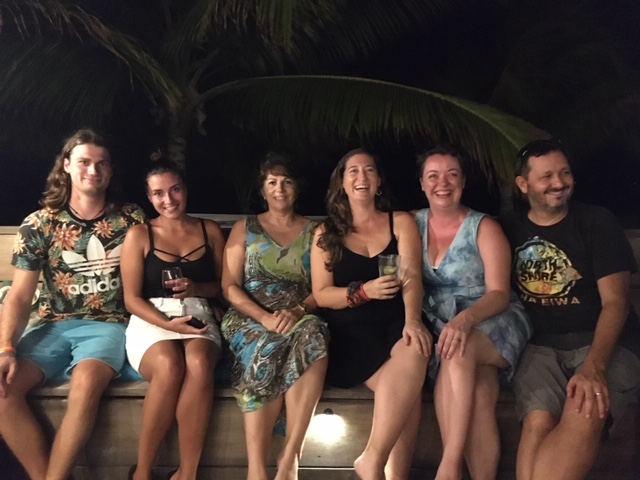 There are a surprising number of South Africans living in Belize.  At least, I am surprised by the (growing) amount.  I don’t think I’d ever met a South African before Belize but now my best friend is one.

The Placencia Beach Club held, last night, what I believe was their best attended theme dinners yet.  A collaboration with our friend, Dean Uren, GM and former executive chef at Itz’ana Resort and Residences.  (Yeah, you guessed it- he’s South African.   He’s also Julia’s husband)  The menu featured all the South African favorites and we tried them all.

I’ve written about the Beach Club here and here before; I appreciate them planning and trying themed international nights.  They’ve done Japanese, German, Mediterranean, and more but South Africa was a hit.

When we sat down at our table for 30 people, half of whom were South African, I began to wonder—why are there so many?  South Africa looks lovely.  Endless miles of beautiful coast line, vineyards and wineries galore, but the government is broke, infrastructure is deteriorating and violent crime is increasing.   I think Belize will continue to see an increase in immigrants from South Africa in the coming years.  A happy consequence of the influx is that they’re bringing their flavors to the increasingly more diverse market.

Placencia is quickly becoming a very interesting place to feed.  I’m not going to say we’re a foodie’s destination just yet but, my goodness, we’re getting there!  Competing alongside traditional dishes (stew chicken, tamales, sere, Belize/Mexican tacos) are an ever-growing variety of international delights from Thai to Italian, we even have a new French crepes truck remember?

On a personal note, I just want to brag about what an adventurous eater I am becoming.  A mere 3 years ago I wouldn’t even eat meat off a bone (seemed so savage and unappetizing).  While I still won’t eat wings or ribs or such, I will mess up a BBQ chicken breast or cuts of stew chicken.  Last night I tried a bite of the Peri Peri chicken LIVERS!!!!  I loved loved loved the flavor…. But liver, blek!

Do you know any South Africans?  Have you tried any of the food?  What is your favorite?

Snorkeling day trip to Hol Chan and a stop in Caulker

5 thoughts on “South Africans in Belize”

A BIG beach and sea clean-up

A BIG beach and sea clean-up