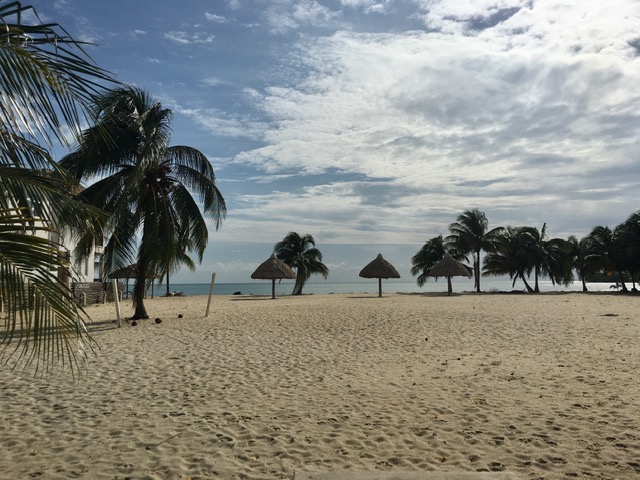 Okay, I’m not complaining BUT… life in Placencia isn’t perfect.  I mean, I’m not going to ask to speak to a manager about it but… this wasn’t in the brochure.  With endless amounts of rose-colored info out there on why life in Belize is picture-perfect, ideal, utopian; I thought I’d make this post a bubble-buster.  Here are some of the reasons I think life in Belize isn’t flawless: the bad of Belize.

Perhaps this is a stupid one but unless you’ve lived in a subtropical climate, before I don’t think you can appreciate how hot HOT is.  Endless days of blazing sunshine and motionless, muggy air may sound good to you when you’re suffering through short, bitter and bleak winter days in North America and Canada but in practice it isn’t always nice.  In practice it’s nearly losing your jorts at the vegetable stand because the denim waist band is too stretched and wet with perspiration to cling to your hips any longer.  In practice it’s 3 showers a day and still not smelling fresh.  People may tell you (lies) that you’ll become accustomed to the heat, that you’ll “get used to it.”  You’ll just get used to sweating profusely- that’s what you’ll get used to.  We’ve just become super proficient at sweating; like, I don’t want to brag or anything BUT we’re really good at it.

It’s a darn good thing I don’t have a real job anymore because keeping house is a full-time job here- and then some!  Lordy, I’ve never cleaned like I do in Belize!  Christ on a cracker- the dust.  Who would have thought a little beach town on the Caribbean would be so dirty?!  Things that I would maybe do annually around the house in New Jersey like cleaning the window screens—easily once a month here (and it’s still not enough)!  I’m Swiffering my lovely hardwood floors here EVERY. DANG. DAY.  And if it’s not the dust, it’s the mold.  Honestly, I could rant about this eternally but you wouldn’t grasp the magnitude of housekeeping here until you lived it.

It’s not just inside the house that needs cleaning either, it’s the outside too.  We wisely splurge on a grounds taker to attend to the garden and raking (an invaluable service when you realize how quickly vegetation grows in the tropics) but I’m constantly picking up litter from in and around our yard.  For all the strides Belize has made to be recognized as an eco-friendly and conservation conscious destination, it’s people still have a long way to go when it comes to daily practices.  Littering is rampant, it is engrained in the culture.  I hope the tides are changing on this but historically littering wasn’t viewed as bad or dirty.  Many cayes and coastal areas are built on garbage, it was seen as “free fill.”  You have low land but you also have trash… well there you go the problem is the solution, no brainer right?  Far far too many people think nothing of tossing their Styrofoam lunch container on the side of the road when they’re finished with it.  They don’t give a second thought to chucking a plastic juice bottle from the window of the bus.  Lots of locals can simply overlook litter but for me it undeniably detracts from the beauty of Belize.

Consistency… the absence of it

If you come with patience, you’ll lose it.  If you come without, you’ll learn it.  I don’t remember who I heard that from but it’s spot on!  New expats always have a load of questions that they can’t seem to find “official” answers to.  That’s usually because there is no official answer in writing for you to find.  Ask one Immigration officer in one office one day, get one answer.  Ask another officer, or even the same officer but on a different day, get a different answer.  This used to infuriate my Type C Personality husband.  I would goad him more by saying something like, “well, Belize is a young country (younger than you) and they’re still figuring it all out but WOW! Not only do we get to be witness to that process, we get to be part of it.  How lucky are we? The discomfort you feel is the growing pains of a new nation!”

Inconsistency isn’t unique to the government branches, nay nay.  It’s everywhere, even in the food you buy.  Belizean produced products are light on Quality Assurance.  The same brand can put out drastically different quality.  It’s not usual for one or two sausages in THE SAME pack to be intensely different tasting than the rest.  Maybe a decrease in structure and conformity and regulations is exactly why moving to Belize is appealing to you; I personally don’t hate it, I can go with the flow but some people find this obstacle insurmountable.

If you believe some of the hype about how affordable retiring to Belize is, or how you can enjoy a higher standard of living then you currently have in the US but for less if you relocate your family to Belize… well, I’m sorry to say- that’s not typically true.  Belize ain’t cheap baby!  I see SO many people shocked that living in a “third world country” could cost so much.  Here’s the thing, Belize doesn’t produce much aside from sugar, citrus, and poultry.  Even those beautiful hardwoods the country was known for are becoming more scarce and therefore more costly.  Almost everything is imported; from diapers to building materials to TVs to apples to cars.  Imported products are heavily taxed and you will pay a premium for products here (and often be disappointed in their quality).

I have found that if you want to live by North American standards you can expect to pay North American prices.  Now for us, our move was part of a bigger lifestyle change and we planned on living with less anyway.  We weren’t going to be owning vehicles any more or relying on convenience foods and premade or frozen entrees, we weren’t going to be paying monthly subscription fees for satellite radio or gym memberships, we didn’t need a dishwasher or air conditioning.

Certainly you will find comparable savings; for instance, annual land taxes are laughably low here.  I think we pay $10 bzd a year!  Water and trash removal, childcare and private school tuition, housekeeping help or weekly gardener- all very afford, all at a deep discount compared to North American prices.  But I find any savings is quickly consumed by the things that are more spendy: automobiles, fuel, electricity, home goods and housing material.  It’s a give and a take and learning to live thriftier- you won’t fall in to savings if you’re simply trying to replicate your North American lifestyle here on the beaches of Belize.

I don’t know why it is: the “Go Slow” motto and Belize time notion don’t apply from the second someone settles behind the wheel of a vehicle- they go from being totally laid back and in no particular rush to do anything to driving like they’re trying to win the Indy 500.  I see it constantly on the peninsula and even here in the village—where are you speeding to?! You’re already here!  It’s the reason my son is still riding tandem on my bicycle: I can’t trust him fully but more to the fact I can’t trust these crazy drivers; my baby is going to get creamed by one of these reckless motorers.

I guess there’s no real Driver’s Education or schooling requirement for obtaining your license and police do not enforce traffic laws or moving violations.  I asked a local once why they don’t set up a speed trap on the peninsula and generate some income for the police department by ticketing some of these jerk drivers.  She said that only Traffic Police can ticket you for a traffic offense and the peninsula doesn’t have Traffic Police, only towns do.  The closest Traffic Officer is stationed in Dangriga- over an hour away.  So, what?  The roads between here and there are just a long and lawless expanse of drive-however-you-dang-well-please?!  I don’t know if that’s fully true but based on observation: it’s practically true.

If you’ve ever driven the (breathtakingly beautiful) stretch of highway between Belmopan and Dangriga, the Hummingbird Highway, you have probably been overtaken by another vehicle.  They probably even passed you on a blind curve, as there are many of them.  Years ago, this probably wasn’t a problem 99 times out of 100 but today there are significantly more cars on the roads of Belize but drivers are still blasting around the country as if they’re the only ones out there.  Motor vehicle accidents are on the rise and they’re often fatal as safety measures such as child car seats or seatbelts and airbags are not widely used and emergency response time or proximity to hospitals is lengthy.

*****I have dozens and dozens of reasons I think Belize is great; if you are a regular reader of this blog, you already that. The above is simply some things I don’t love or areas I think Belize can improve on. Everyone will have their own opinion and mine is simply that: NO place is perfect, Belize included, but if you love where you live you accept it warts and all.

Goodbyes are the hardest part