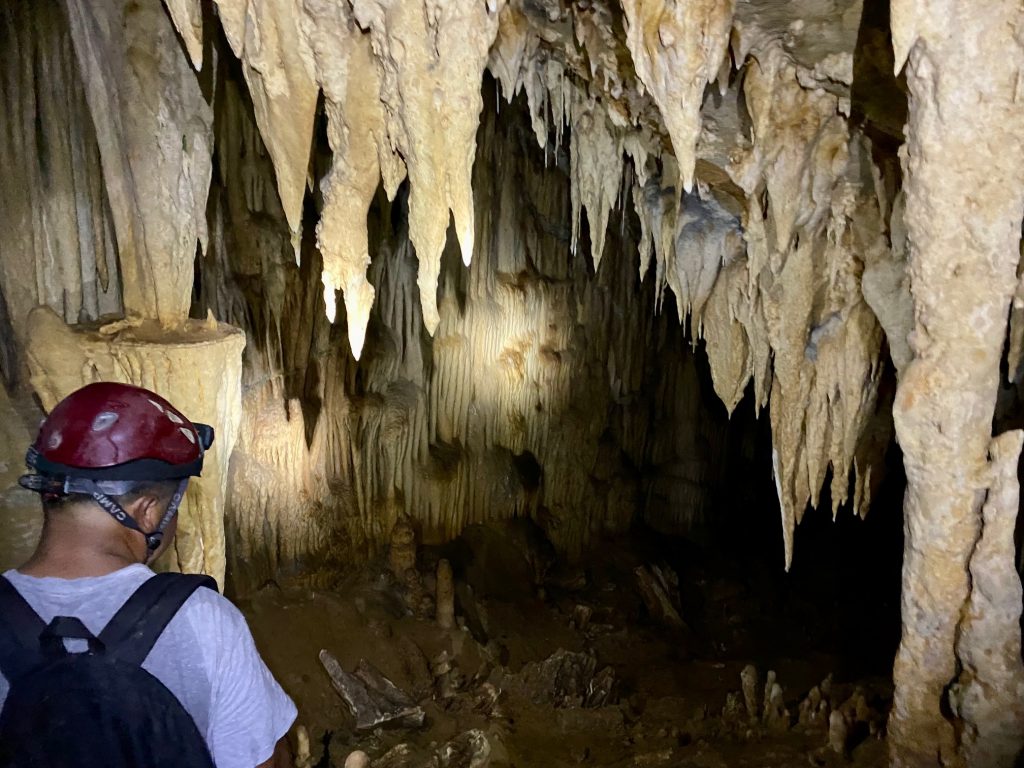 My goodness you guys! Just when I think that I’ve done, or at least heard about, most of the amazing adventures Belize has to offer… I get proven completely wrong! That’s precisely what happened last week when we went south to Toledo District. I can’t believe all of the hidden gems in Belize’s “Forgotten District” I hadn’t a clue even existed. What an incredible adventure and special honor to be one of the few people to tour Yok Baluum (Jaguar’s Paw) Cave. Southern Belize’s Toledo District is a uniquely special but often overlooked area of the country. Astonishing natural beauty and the rich cultural heritage and traditional practices of the Maya people are preserved here. I can’t wait to return and delve deeper in to this mysterious region, to discover more of the amazing places and experiences to be had. Our expedition in to Yok Baluum Cave has only whet my appetite for further Toledo adventures!

Searching out an excursion

Last week Belize celebrated George Price Day, the newest national holiday (added in 2021) and there was no school on Monday. Fellow PIA parent and dad to Maia (Mitch’s best girlfriend of the moment) suggested an off-the-peninsula diversion to pass the day- yes! But where to go for a day trip adventure that we haven’t all done already? I usually think to go west, like our recent jaunt out to Angel Falls Zip Line over Christmas Break, but I wondered if we could find something else close enough to home but less familiar. I did some Facebook sleuthing and asked our friend (Toledo native and Placencia’s top culinary tour guide) Lyra who could point us in the right direction to have a grand adventure down south. Bruno Kuppinger of Toledo Cave & Adventure Tours seemed to fit the ticket and boy, did he deliver on that grand adventure!

He set us up with his head guide, Jose Mes of Santa Cruz village, to take a cave tour. I was excited for anything because I’ve hardly seen any of Toledo yet and only knew of Blue Creek Cave from a previous visit but hadn’t toured inside. This dry cave that Jose led us to is quite close to Blue Creek as the crows fly and on our hike he pointed out a ridge on a nearby cliff that was entrance to yet another cave so this region seems to be littered with them. As Jose and his helpers led us on a precarious and very muddy 90-minute hike to the cave, we pasted through communal corn and cardamon fields the local villagers tend (these more traditional Maya villages practice land sharing and cooperative agriculture- its quite fascinating to hear about their time-honored traditions regarded when, how, and where to plant based on ancient wisdom from their ancestors. very cool).

All the things I didn’t know

I told Jose I had never heard of this cave before and he said that not many people have. Hardly any one visits it either! Aside from a small group of archeologists a number of years back, Jose has given this particular tour around 3 times a year over the past 9 years. He also thinks only about 2% of his fellow villagers have been inside. So probably around 100 or so modern-day people have explored this cave and we’re part of them?!!? How incredible is that? As if my mind wasn’t already blown, Jose dropped another bomb on me: there are FIVE ancient Maya Sites in Toledo. I only knew about TWO- Nim Li Punit and Lubaantun. Those are the ones anyone ever talks about and the NICH manages but there are 3 more ancient cities/ temples/ palaces in Toledo that are managed by the indigenous Maya of the area. We apparently drove right past the road for one as we made our way to meet Jose in Santa Cruz and had no clue! So now I have to plan a day to return and explore Uxbenka and Rio Blanco Park. I also want to return and have Jose show us more cool caves!

When you hear “jaguar paw cave” you think: tubing and zip lining at the Caves Branch Outpost but this Jaguar Paw is the translation of the Mayan name for the cave because of it’s distinct foot-shaped stalactite at the entrance. This super secluded cave takes the cake for most magnificent natural features I’ve ever seen. The pristine environment of the cave and particular geology afford Yok Baluum a staggering abundance of striking structures and components. I don’t know all the technical names for the different formations but this cave surely had them all- in spades! The stalagmites and stalactites, the flowstone and the curtains, the delicate straws and the sparkly bits. Chamber after chamber we were awed!

After 90-minutes to the cave, 90-minutes in the cave, and 90-minutes back out… we were spent! Jose invited us back to his home where his wife and daughter had prepared a late lunch for us. A beautiful chicken soup with ground vegetables and hand-ground corn tortillas hot and fresh off the Fogon (traditional fire hearth). We all drank a replenishing cacao and corn beverage and asked Jose questions about his childhood and life in Southern Belize. It was a nourishing meal for more than just our bodies. The Maya people have such warm hospitality and their traditional lifestyle is so intriguing; I’d love to spend some more time learning about their culture and practices and how they live so closely with nature– building their dwellings from renewable sources, rotating their crops and fields for sustainability, working communally to manage their resources. There’s a base of ancient knowledge here that we can study and learn from.

Could you visit Yok Baluum too?

This was a GRAND adventure, one of my top experiences for sure! The sheer exclusivity of it- SO few people ever do this! I don’t think it will ever become a mainstream type of tour. For one thing, it’s so remote. Santa Cruz is in the deep south of the country, only a few miles from the Guatemala border, then from the village it is a hard hour-and-a-half slog over slippery and shoe-sucking terrain to reach the cave. The caving bit of things is also challenging; requiring some crawling and climbing and tight squeezes and long reaches. If you suffered an injury out here it would be a HARD reach to help. All that said– Mitch and Maia both did it! I mean, I could hardy believe it but they were super troopers. We also went with pretty much perfect conditions: during a cold front and a dry spell (I couldn’t imagine how much muddier it could get with rain, sheesh!). I’d rate this expedition pretty high on the strenuous scale. There’s no technical sort of elements like rappelling or using equipment to climb but overall it’s just demanding. More so than ATM Cave.

So, if you’re fit and keen for an uncommon adventure- talk to Bruno and Jose at Toledo Cave Tours to plan your own expedition. I know I’ll definitely be back!