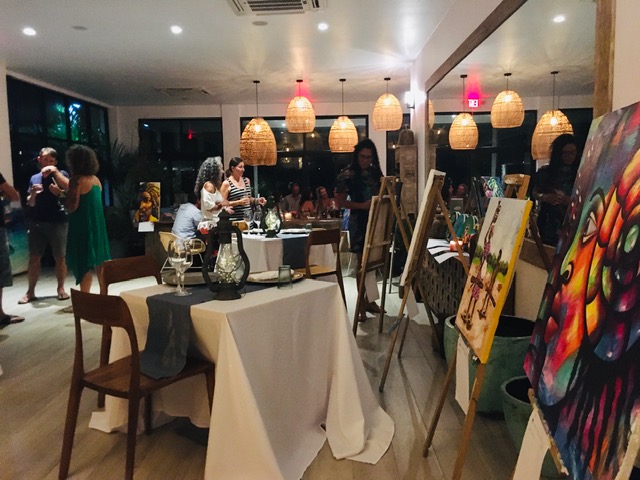 We’ve had a busy week.  “Busy” being a relative term when you live a laid-back lifestyle.  We’ve just returned from a trip up to Cayo but before I tell you about that, I’ll recap some village happens from Placencia this past week.

On Saturday night we attended a fundraiser for Greta Leslie, owner of Art n Soul Gallery on the sidewalk here in Placencia.  Loads of beautiful pieces from different Belizean artists were on auction at Muna Rooftop Restaurant & Bar.  You could have bid online ahead of time or in person at the event.  We snagged two great paintings for our guesthouse and had a nice evening of kid-free conversation.

Greta needs to travel to Merida, Mexico for several weeks of radiation treatment.  If you’d like to add an awesome piece of original art work to you collect and help her out at the same time, browse her Gallery’s Facebook page and see what catches your eye- she’ll ship anywhere!

Beach is beautiful but a manatee needed to be moved

The weather has been stunning- yes, it’s HOT, but it’s also clear and sunny.  Over night rains have been nourishing the plants and leaving things lush and vibrant.  The sea was just the way I like it on Tuesday: calm clear and flat flat flat.  After a meeting for the Peninsula Volunteer Fire Department, we hit the beach for a bit.

We saw a group of volunteers head out in kayaks to collect litter from the mangroves on Placencia Caye.  This group has been doing a phenomenal job with beach clean ups around here- it’s a never-ending task as garbage from all over Belize and beyond can find its way to our shores.  Then we saw an odd sight: a boat slooooowwwwly towing something from the beach just north of Caribbean Beach Cabanas.  As it passed us, Darcy (at least I think it was Darcy, our friend from the Humane Society and Crocodile Research Coalition- the boat was just far enough out that I could hear them but had a hard time seeing their features.  I’ve mentioned Darcy before in this post about PHS fundraiser and you might remember that she was also the brave soul that came to take that filthy racoon from us: read about it here) called out that it was a dead manatee they were towing.  Shame! I suppose it washed up and they were taking it somewhere for an autopsy or simply pulling it further out to sea so nature’s process wouldn’t stink up our beach.

Boaters need to use extreme caution along our coast and in the lagoon as it is important habitat for manatees.  They’re a protected species and need our conscientious effort to avoid harming them as they’re rather sluggish and can not quickly skitter out of the way of a boat.

Winner Winner- Everyone Gets a Chicken Dinner