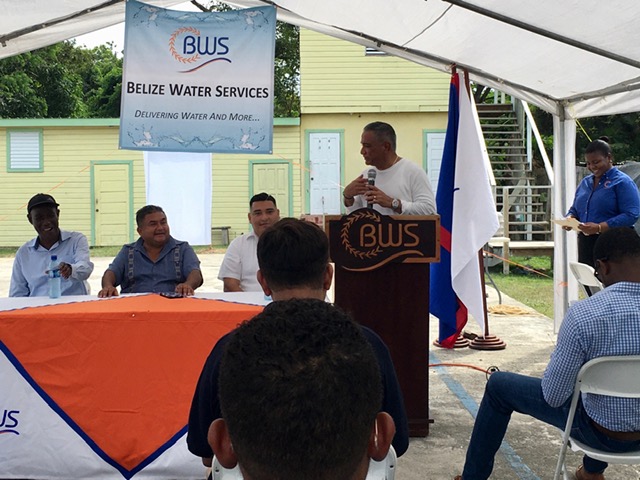 I saw both Placencia’s Village Council and Seine Bight’s Village Council share event notifications on Facebook about groundbreakings and improvement initiatives by BWS (Belize Water Services). Curious about what was being promised and why it was being given, I attended the two ceremonies this afternoon in each village and here’s what I found out.

Now, we’ve only lived here for five years but in that time I’ve heard nothing but complaints from long-time-Placencians about BWS. I don’t understand all the history but I always have an ear open for village gossip so this is what I gather is the beef. **this is just my understanding of things based off unofficial sources and sh!t talk; I write a blog not a national news publication- I don’t owe anybody journalistic integrity. okay? now, do you want the word-on-the-street or not?** Years ago the Village Council owned and operated the Water Board here and things were going swimmingly. At some point, the GOB got the notion that Placencia should have a sewer system. A big, modern network that would alleviate water pressure problems for delivering water to customers AND provide wastewater and solids removal. Nowhere in Belize does a network like this exist and Placencia’s sewers were meant to be the benchmark, the new standard that other areas would strive for. Obviously this was a project of massive magnitude and huge expense but whichever party was in power at the time said the IBD (Inter-American Development Bank) was ready and willing to fund the project IF, and only if, the water board was a public utility not a private one. So the Village relinquished the water board to BWS under a certain agreement but from the griping people still do about BWS, it sounds to me that the compensation that was promised wasn’t delivered in full and we’re no closer to getting a sewer system. DRAMA!

There was even a battle brought to the Cabinet to get the water boards handed back over to the villages but with the rapid residential and commercial growth on the peninsula the Ministry ultimately decided to keep control over the utility and invest heavily in improvement and expansion. Which brings us to today.

What the Expansion Project entails

The scope of this project is estimated to cost $12.5 million with the main expenses being a new transmission line from the well site in Independence directly to Seine Bight, a 500,000 gallon water reservoir in Seine Bight, and the installation of watermains up to Maya Beach. Currently, our 26-year-old system is over capacity and only meets 60% of the demands. If you’ve driven the peninsula lately, you know that this place is booming- we’re in a rapid growth phase and the new demand will burden an already insufficient system further. The proposed improvements will increase capacity by 115%

BWS has also donated a new trash compactor truck to Seine Bight and pledged $100,000 for renovations of the Placencia Community Center and the Basketball Court. In addition, both communities will receive an annual donation of $25,000 for three years.

So all the BIG players came out for these two ceremonies, and because it’s an election year, they took full advantage of the opportunity to pump the good job they’ve been doing. Police Commissioner, Chester Williams, spoke in Seine Bight about the changes they’ve made in response to the community’s demands. They’ve recently gone from 12 officers in Seine Bight to 31 officers; they received a new pick-up truck and 2 motorcycles to patrol with, and soon the Ministry of Health will ensure they’ll have their own resident nurse.

When the Hon. John Briceno arrived for the second ceremony today it was the second time in history that the Prime Minister of Belize paid a visit to Seine Bight.

A Memorandum of Understanding was signed between the Ministry of Labor, Local Government and Rural Development and the Seine Bight Village Council regarding the maintenance of the trash truck and beginning this year, business trade licenses will be instituted and the fees paid to the VCs so that money can be kept and used locally.

So that’s the good gossip! Don’t forget to subscribe to RealLifeRecess to stay up to date on all the community happenings and talk-about-town as it becomes known to me; and if you have a hot tip come whisper in my ear or drop a note in the comments.